These healthy dried fruit snack balls made with coconut, apricot and sultanas make a delicious bite-sized snack. Free from refined sugar, these energy balls are perfect for grazing on when hunger strikes and also make a tasty children's treat.

When I first made these apricot and coconut snack balls, I was on a quest to find healthier snacks for my family so we could swap them for the unhealthy snacks we all loved!

If you're anything like us you'll know how hard it is change habits where snacks are concerned but I was determined to try. We'd all got used to eating the wrong kind of snacks during Christmas and New Year and although I don't mind a few unhealthy snacks, I just wanted a healthier balance. New year, new healthier me.

So, I decided to try and swap the unhealthy snacks for some healthier options like these coconut, apricot and sultana snack balls, sometimes called energy balls.

I was especially hoping to make an energy ball my two children could enjoy as a snack and as these snack balls are full of dried fruit they make a great healthy snack for kids. You can shape them into small bars instead of balls if you want too.

Not only are these snacks delicious and healthier than some snacks, they are also one of the easiest snacks to make as there is no cooking involved. In fact, as long as you have a food processor, you can make them in minutes.

So, what ingredients do you need for these snack balls?

How do you make snack balls?

These coconut apricot snack balls are so simple to make. Just put all the ingredients into a food processor and blitz. If you want a really smooth texture then blitz them for longer. If you don't mind a bit more texture in them then blitz them just until they start to come together as a dough.

You can then take spoonfuls of the mixture and roll it into balls between the palms of your hands.

What equipment do you need to make energy balls?

To make these energy balls you'll need a good food processor. I use my Magimix food processor. I've had it for 13 years and it's still going strong and had loads of use! When it finally does stop working I will definitely get another one.

Can you adapt these snack balls?

Yes you can. Snack balls are very forgiving. As long as you keep the quantities roughly the same you can swap the raisins or even the apricots for a different dried fruit. How about prunes or figs?

I used sultanas and apricots as I had a lot leftover from making my Christmas cake but you could use any dried fruit.

Can you substitute the coconut oil

I wouldn't. Coconut oil is great for snack balls as it is solid at room temperature.

That means it's perfect for making this type of snack as it holds all the ingredients together as it sets.

It tastes of coconut too so it's perfect in recipes where you want the oil to add flavour, not just be something to cook your food in. The coconut oil, as well as the desiccated coconut gives the balls a lovely coconut flavour without them being oily.

How to store these snack balls?

Even though coconut oil is solid at room temperature, it's best to keep these snack balls in the fridge as it helps them keep their shape.

How long will they keep for?

If you store them in the fridge they will keep for at least a week, maybe a little longer.

Yes, if you want to freeze them, freeze them in a single layer on a baking tray lined with baking paper. Once they are frozen you can transfer them all to a freezer bag.

All these recipe are free from refined sugars and make delicious healthy snacks. 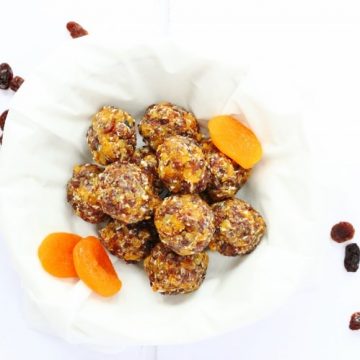 Treat Petit, hosted by Cakeyboi and on alternate months by The Baking Explorer.