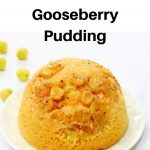 This slow cooker steamed gooseberry pudding is full of sharp tangy fruit topped with a comforting vanilla sponge. If you don't have gooseberries, just replace with other summer fruits!

As I write this, I wish I could say that the weather was hot hot hot. It was a few weeks ago but not right now. Even so, the last thing I want in summer is to make the kitchen even hotter by turning on the oven.

Maybe I should just reach into the freezer and grab some ice cream for a dessert? The only problem is, I don't just want ice cream. Even in summer I love summer puddings. I don't mean, summer pudding made with bread and berries. I mean summer puddings made with stewed seasonal fruit and topped with sponge, crumble or pastry.

Well, luckily I have a steamed summer pudding for you that does not involve the oven at all. This steamed gooseberry pudding is cooked in the slow cooker and unless any fruity baking aromas escape, you won't even know that something is baking!

It's easy to bake in the slow cooker

If you have a slow cooker but haven't used it for baking then I have to ask you why not? After all, it's so easy to do. Once you've made your pudding, just cover the top with cling film and put it in the slow cooker. Then add hot water to the slow cooker and leave to cook on high for a couple of hours.

As the pudding is in the slow cooker, the steam doesn't escape and so unlike a traditional steamer, it won't heat up your kitchen. That's definitely what we all want for summer!

It's also far more energy efficient. But, I'm not giving you this recipe because it's energy efficient. The reason I want to share this with you is that it is really, really tasty. My kids loved it and it is pretty much guaranteed to be a hit with anyone who loves a warm fruity dessert.

And if there's some left over the next day, just pop it in the microwave to reheat and it's just as delicious.

If you can't get gooseberries where you live then you could replace them with any other fruit that goes well in a hot steamed pudding. Of course, apple and blackberries would work but so would cherries, rhubarb or plums. Try to pick something that's in season if you can. I picked these gooseberries with my children at our local pick your own farm but their season is almost over now.

The inspiration for this steamed gooseberry pudding

I was inspired to make this slow cooker steamed gooseberry pudding for a blogging challenge. The challenge was beat the heat with the Slow Cooker/Instant Pot/ Pressure Cooker. Making a hot dessert in the slow cooker definitely helps you do this. So, why not step out of your comfort zone and use your slow cooker for something different too? 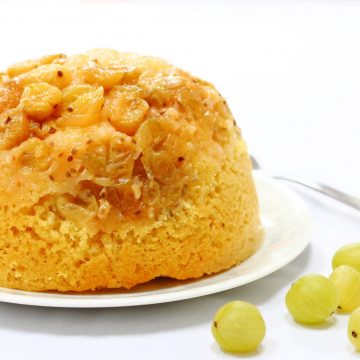 If you replace the gooseberries with another fruit you may need less sugar as gooseberries are quite tart. Nutritional information is approximate and a guideline only.

If you'd like to see some more of my hot pudding recipes then why not take a look at one of the ones below?

Cook Once Eat Twice hosted by me, Corina