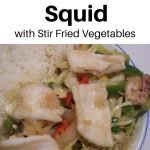 This easy Chinese squid recipe may not be authentic but it is a tasty and healthy way to eat squid! Asian stir fried vegetables topped with slightly crispy squid pieces and served with rice. So tasty!

There are lots of ways to eat squid!

Well, I've just got back from holiday in Croatia and have discovered lots of ways to eat squid! There were some great seafood recipes and it was often served in a sea food pasta. The squid I had in pasta was very good but the Croats also seemed quite keen on stuffing small ones with cheese and Dalmatian ham before grilling or barbecuing them.

It was nice, but sometimes a bit tough and slightly overpowered by the strong cheese and ham.

You're probably right in thinking that that's not a recipe I plan to recreate. However, it did get me thinking about more creative ways to eat squid.

An easy recipe if you've never cooked squid before!

Maybe I shouldn't say creative. After all, stir frying some vegetables and topping them with fried squid is probably not the most unusual recipe you've seen. However, for someone who doesn't often cook squid, just buying it to begin with is stepping outside the comfort zone!

I've called this recipe Chinese squid but I'm not sure if the Chinese really would cook it this way. It's more that the flavours are inspired by Asian and Chinese food. I never had any squid like this when I was in China! The truth is, I just didn't have a better name for it!

What ingredients do you need for Chinese squid?

How do you make this recipe?

Basically it's a quick oriental stir fry topped with the fried squid. So, just heat some oil in a pan. Stir fry the vegetables quickly over a high heat. Then add the lime and soy sauce.

How do you fry the squid?

It's really important that the squid is cooked quickly so it's still tender. I lightly coat the squid in flour then deep fry it for just 1-2 minutes. Make sure the oil is hot before adding the squid. The squid puffs up and turns white when it is ready.

Can you adapt the rest of this Chinese squid recipe?

The vegetables I used went well but so would many others! So, feel free to vary them. The main thing is that the vegetables should still be crunchy and lightly cooked.

The lime goes really well with the squid and lifts the dish making it really fresh tasting. However, you could use lemon instead. You could even add light drizzle of sesame oil.

The Asian stir fried vegeatables that go with the squid can be refridgerated for up to 3 days and then reheated in the oven or even stir fried again.

Can you reheat the fried squid too?

Yes, you can! However, squid is one of those ingredients that is so much better when freshly cooked. It can be easy to overcook squid in the first place. If you reheat it, it can even more easily go chewy and overcooked.

Even so, if you do have leftovers they can be stored for 3 days in the fridge as well. To reheat them it is best to heat the oven to 180C. Put the squid on a baking tray and cook for about 5 minutes. Check that it is piping hot and cook for an extra minute or two if necessary.

I love being inspired by Chinese and East Asian food cultures. So, if you liked this oriental squid recipe then why not try one of these recipes: 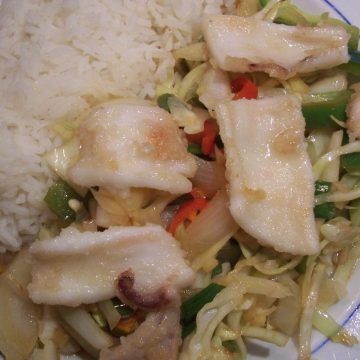