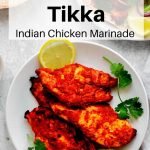 This chicken tikka recipe is certain to become a real family favourite. Just marinate the chicken overnight in a simple spicy yogurt marinade. The chicken is so so good and great on its own or in a curry.

Indian food is a real favourite of ours and I've marinated chicken with Indian spices and yogurt many times. But this time I wanted to get the chicken to taste as near to what I feel is chicken tikka as possible. I read lots of recipes for chicken tikka marinades and in the end I've come up with a version that tastes really authentic.

Is this an authentic chicken tikka recipe?

Well, before you argue, authentic to me anyway. I've never been to India and so I'm thinking of the chicken tikka from British Indian restaurants, supermarkets and takeaways. If that's the type of chicken tikka you're used to as well then I'm sure you'll love my easy homemade version.

The recipe for the tikka marinade contains all my favourite spices - cumin, cayenne, paprika, cinnamon, coriander and turmeric as well as ginger and garlic.

I didn't make it too spicy because the chicken was for the children as well (they love it!) so you could add a little more cayenne pepper to it. I marinated the chicken overnight so the flavours really penetrated it. But if you don't have time to marinate it for a long time don't worry. This recipe will still result in some tasty Indian chicken.

What ingredients do you need for chicken tikka?

There is a rather long list of spices for this chicken tikka but apart from that you don't need much. Just:

Why is chicken tikka sometimes so red?

What to serve with chicken tikka

This chicken tikka is really versatile and it's great to put in a wrap with lettuce, onion and tomato. You can also add a generous amount of raita and some mango chutney or lime pickle.

I also often serve it with a quick homemade vegetable curry, a simple cucumber raita and some steamed basmati rice. The vegetable curry and raita make a really tasty side dish for the chicken.

It would also be great with these Bombay potatoes.

Can you put it in a curry?

I served this as a dry chicken tikka but you could use the marinated chicken in any chicken curry recipe. Why not put it in this chicken tikka masala?

It also goes really well in this North Indian chicken curry. Once it's been marinated overnight the chicken is really tender and tasty.

How to cook chicken tikka?

Chicken tikka can be cooked in different ways. I like to grill (broil) it but you can cook it on the barbecue or in a griddle pan so you get the deliciously charred bits on the edge. It is equally good just cooked in a frying pan.

You can also bake it in the oven. Depending on the thickness of the chicken breasts it will take 20-25 minutes at 180C.

Can you adapt this chicken tikka marinade recipe?

Yes, if you're missing a spice then just miss it out. It's also important to taste the marinade before adding the chicken to check that you like the flavour. Increase the quantities of the spices a little for even more flavour!

As I said above, you can definitely omit the food colouring!

I used chicken breasts but you can use this chicken tikka marinade on legs or thighs too. One thing is certain, this meal is a real crowd-pleaser that I make again and again!

What to do with leftover chicken tikka?

Using up the leftovers is something I love. In fact, as you can see from my Cook Once Eat Twice recipe collection, I love recipes that make enough for two or more meals.

If you have some leftover tikka then why not use it in one of these recipe ideas?

If you have any leftovers it will keep in the fridge for up to three days. You can eat the chicken tikka cold or reheat it. If you reheat it make sure it is piping hot. You can use either the microwave or the oven.

Can you freeze cooked chicken tikka?

Yes, any cooked chicken tikka can be frozen for up to three months in an airtight freezer bag. Defrost thoroughly in the fridge before using.

I love making curries and have lots of recipes here on Searching for Spice. In fact, I even have a recipe collection devoted entirely to easy homemade curries from scratch!

Why not have a look at one of these recipes? I think you'll also love my recipe collection of spicy midweek meals. 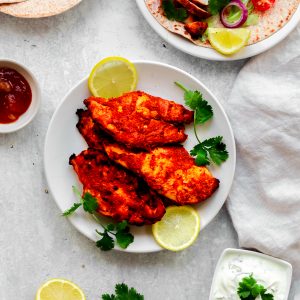 Corina Blum
This homemade chicken tikka tastes just as good as any chicken tikka you can buy! It's a great recipe for an Indian chicken marinade and you can then eat the chicken in all kinds of different ways or add it to other recipes.
4.57 from 30 votes
Print Recipe Pin Recipe
Prep Time 5 mins
Cook Time 15 mins
Total Time 20 mins
Course chicken, Main Course
Cuisine Indian
Servings 4
Calories 339 kcal

If using chicken breasts, butterflying them first will give a larger surface area so the marinade can flavour them more. Nutritional information is approximate and a guideline only.