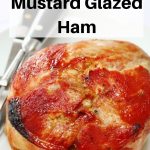 This maple syrup and mustard glazed ham is the perfect recipe to make for a buffet meal. The ham is tender, full of flavour and so much better than pre-cooked sliced ham.

Quite often when we visit my mum there's a huge joint of ham in the fridge. It lasts for days and we just slice a bit off for sandwiches at lunchtime or to make meals with in the evening.

If you visit my house you are unlikely to find any ham at all and if you do, it'll probably be a supermarket pack with about 5 identical slices in. The ham itself will be almost unrecognizable from the lovely ham we enjoy at my mum's.

Well, except when I make this maple syrup and mustard ham. The ham is really moist and full of flavour, delicious warm as well as cold. The glaze is lovely and sweet and it's definitely worth saving any sticky pan juices to drizzle over your plates too!

Why it's worth cooking your own ham

So, you've gathered that I don't cook ham very often BUT it really is worth it for certain occasions. Supermarket ham is often reconstituted and made to go further by being filled with extra water. That might be ok for a lunchbox sandwich but not for a celebratory meal! Be it Boxing Day, New Year's day or just Sunday lunch.

A good joint of home cooked gammon or ham is perfect for a special Sunday lunch and the leftovers do make great sandwiches! I love to cook this ham around Christmas time as it's great to have in the fridge for easy light meals and sandwiches.

What's more, it's economical and easy to cook. There's really no reason not to!

Do you need to glaze ham?

Is it easy to cook a joint of ham?

Ham is really simple to cook. I like to boil and then bake the ham as it makes the ham really tender. Boiling also removes any impurities and makes it a little less salty. However,  you often don't need to boil ham these days. You can just bake it. Alternatively you can just boil it although not it you are planning to glaze it too!

When you are boiling the ham add a few peppercorns, cloves or other hard spices such as star anise to help flavour the ham. This ham recipe uses cloves and peppercorns.

How long to boil the ham for?

After you have brought the ham to the boil, simmer it for 20 minutes per 450g.

How do you make the maple syrup and mustard glaze for the ham?

This is one of the easiest ham glazes. It's not much more effort to make a glaze for the ham than to cook it without. You just mix all the ingredients for the mustard and maple syrup glaze together and then pour them over the ham. It really couldn't be simpler.

How can you adapt this glazed ham recipe?

This maple and mustard ham is adapted from a  Gordon Ramsey recipe. The use of maple syrup and mustard really caught my eye! I adapted it a little though.

The first time I made this recipe I used one teaspoon of mustard which wasn't quite enough. There was just a hint of it in the taste. Now, I like to use a whole tablespoon of mustard. Depending on your tastes and how strong you like your mustard then do feel free to vary it.

If you don't have any maple syrup then you can substitute it for honey. Honey and mustard together are also a classic ham glaze.

How long can you keep this glazed ham?

Once the ham has been cooked then it keeps well in the fridge for 3-4 days. This means it's great for cooking around Christmas time as you can cook it in advance then serve it as part of a cold buffet meal.

This maple and mustard glazed ham is a great buffet recipe 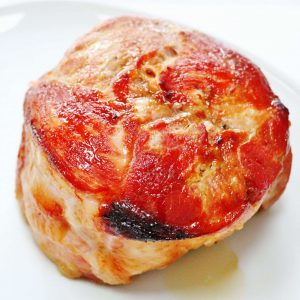 Cooking times depend on the size of the ham.   Allow the ham to boil for 20 minutes per 450g  Nutritional information is approximate and a guideline only.

A joint of ham is perfect if you like to cook for more than one meal at a time. If that's you then do check out my Cook Once Eat Twice Recipe collection too!