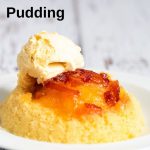 This microwave sponge pudding with marmalade can be on the table in less than 10 minutes. It's a fantastic last minute dessert that's perfect for those days when you NEED a pudding fast!

Sometimes you just want to eat something sweet. Maybe a cake. Maybe a pudding. What a shame that those type of treats usually involve heating up the oven, baking and then, only then can you enjoy eating them. Now that's usually ok. Usually you can wait that long. Usually you can be prepared.

However, there are times when you are a bit peckish and nothing but a pudding will do and there is no way you can wait an hour to eat one. Those desperate times call for microwave baking. Don't turn up your nose if you've never tried it.

A microwave pudding can be a beautiful thing, a thing you can mix up in a just a few minutes and a couple of minutes later transform into a light airy sponge, which is even better if topped with something sweet and tangy and even a little bitter. Something like marmalade.

Can you adapt this microwave sponge pudding?

You don't have to use marmalade for this sponge pudding. You could use any jam or even stewed fresh fruit. However, there is something that brings back memories of childhood, at least for me, that makes marmalade all the more attractive. I love the orange tang, the slight bitterness and the fact that it isn't too sweet.

Don't worry if you are not a big marmalade fan though. Any jam or would work. Why not use lime or lemon marmalade instead too?

Is this a kids dessert?

I feel that a jammy sponge pudding is a kids dessert. By making this with marmalade it's definitely a pudding that adults will enjoy too!

That doesn't mean that kids won't like this and of course if your kids really like blackberry jam then go ahead and make it with that instead!

Do you use thick or thin cut marmalade?

I've made this microwaved marmalade sponge pudding with thin cut and thick cut Seville orange marmalade. Both work really well so it just depends on personal preference. If you are not very keen on too much peel then use a thin cut marmalade but if you love the chunky stuff then go ahead and use it!

I wasn't actually very keen on marmalade until recently but have been using it quite a bit in baking and it has definitely grown on me.

Can you eat the leftovers later?

This pudding is quite small. It's the perfect size to serve two people so you probably won't have any leftovers. However, if you are making it for one person and want to eat the leftovers the next day, just keep it in the fridge and reheat for 20 seconds in the microwave before you eat it.

What to serve with this marmalade sponge pudding?

I love this sponge pudding with some vanilla ice cream. It's the perfect accompaniment. However, it is also great with custard or even a little cream.

What Ingredients are in this Microwaved Marmalade Sponge Pudding?

This sponge pudding only contains 5 ingredients: Marmalade, butter, sugar, self-raising flour and an egg. It's very easy to make. You don't need much equipment either. Just a mixing bowl and a wooden spoon to beat the ingredients together.

How to make this Microwave Sponge Pudding Step by Step

There's a full recipe card with quantities further down this post but here are just a few step by step pictures.

You'll need marmalade, sugar, self-raising flour, butter and and egg. Put the butter and sugar in a bowl and cream them together.

Add the egg and beat it into the butter and sugar mixture. Then add the flour and beat together with the wooden spoon until smooth.

Put the marmalade or jam into the bottom of a bowl. Top with the sponge batter.

Bake in the microwave on full power for 2 minutes.

Put a plate on top of the sponge pudding and turn it upside down. 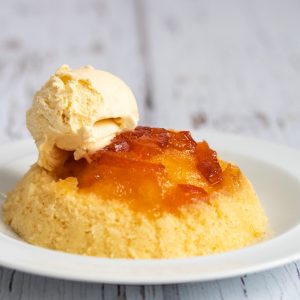 I don't often use the microwave for baking but I have been successful with this rich chocolate microwave cake with an oozy gooey topping!

Why not try my banana upside down cake?

Or if you like sponge puddings then I'm sure you'll love my slow cooker steamed gooseberry pudding.

Do let me know if you make this microwave sponge pudding. I love to get feedback from readers.