Are you looking for tasty dukkah recipes? Why not try this delicious olive and dukkah pasta recipe? It's an unusual Egyptian Italian fusion recipe that's perfect vegetarians and vegans too!

A few years ago I attended a cooking class about cooking with spices. One of the things we made was pitta breads which we ate by dipping in oil and then dipping the oil covered pieces of bread into little bowls of dukkah which then stuck to the pitta bread. It was the first time I had heard of and tasted dukkah and I loved it.

After that class I wanted to use dukkah at home and make some dukkah recipes. As you couldn't find it in the supermarket then, it meant I would have to make it myself. At the time I didn't have any children so I had much more time for making things completely from scratch. I had good intentions and planned to make my own but somehow or other it got forgotten about.

Dukkah is a blend of roasted nuts and seeds such as sesame seeds and hazelnuts along with whole spices such as cumin and coriander. These are then ground or pounded together to make a spicy seasoning.

Where can you get dukkah?

Fast forward a few years and I still love to make things from scratch but I tend to opt for things that are quick and easy. I will definitely take the shortcut of buying a ready-made spice mix if it's going to help me make something tasty. After all, the alternative is probably to not make that tasty dish at all.

Luckily, it is now possible to find dukkah in most of the big supermarkets so even if you can't motivate yourself to research and make it yourself, you can still try this lovely pasta dish. And other dukkah recipes as well of course!

The Inspiration for this dukkah pasta recipe

I found the recipe for this olive and dukkah pasta on the blog, Rachel Cotterill, which I was assigned to for this month's Secret Recipe Club challenge.

Rachel is one of those people who seems to do everything: blogging, cooking, travelling, writing books, archery, even coppicing! As someone who can't even find time to make her own dukkah, I was impressed! Her blog is packed full of mainly healthy vegetarian recipes, and many of them, like this pasta dish, are vegan too.

The dukkah with the pasta is an unusual combination but it's really tasty. Normally I can't resist topping my pasta with lots of cheese but this recipes needs no cheese. It wouldn't go with the dukkah so you end up with a much lighter and healthier pasta dish too.

Well, now that I think about it, some crumbled feta might be quite nice but I didn't think about it at the time. I certainly didn't miss the lack of cheese. This was a totally delicious fusion pasta dish. I stuck fairly closely to the original recipe but used a green instead of red pepper and also added some garlic.

How else could you adapt the recipe?

I think there are lots of ways you could adapt this to suit the ingredients  you  have at home. You could use different vegetables. For example I think sugar snap peas would be great in this. Baby sweetcorn would be lovely and so would aubergines or courgettes. 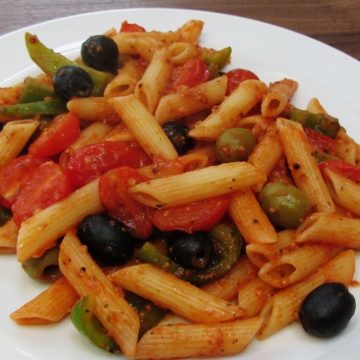 I love pasta as it makes such an easy and tasty midweek meal. Why not try one of my other vegan pasta recipes?

Avocado Spaghetti with Chilli and Lemon

Or why not one of these 3 easy pasta recipes? Or tinned mackerel pasta?