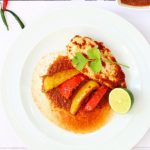 Jamie Oliver's piri piri chicken recipe is quick, easy and very tasty! If you're looking for a Nando's copycat recipe then this is not it but it is a delicious midweek meal, especially if you love hot and spicy chicken!

Today I set myself a challenge: To make a meal from Jamie's 30-Minute Meals

. Some of the menus have no dessert, some an uncooked dessert and some a dessert that you need to actually cook.

Of course, if I'd chosen the easiest menu this would not have been such a challenge. To really test Jamie's book I felt I should choose a menu that looked like it would be challenging in the given time.

Now, I may not be the most efficient cook, but I do consider myself to have a certain amount of experience. If I struggle then surely a less experienced cook would also struggle.

I don't have any data to back up this speculation but I would imagine that a lot of inexperienced cooks will get this book. That's partly because Jamie is so well-known but also because of the 30 minute claim. Most people will think the recipes are quick, and quick is what people are looking for these days.

What is the idea behind 30 Minute Meals?

Jamie explains his concept at the beginning of the book. If we just learn to be more organised and work on more than one dish at a time, we will be able to cook more efficiently. He explains it as revolutionary, but isn't this what many people already do?

I agree that it is useful to have detailed instructions and this will help many people. But at the same time it does mean that there is a lot of reading to do while you are cooking. The first time you make a menu I think you can forget about doing it in 30 minutes. The next time you can aim to be a bit closer to that.

Before beginning Jamie instructs us to get out all our ingredients. In a tiny kitchen, this is difficult so I had to put some things on the floor. In fact throughout the exercise I felt I needed much more work surfaces. I worked as quickly as I could, switching between preparing different dishes. I felt like a whirling kitchen dervish.

Normally I'm calm and relaxed in the kitchen but this challenge brought out a slightly stressed side. My husband tried to have a conversation with me. I have no idea what it was about but he soon decided it was best to wait until later!

So, what was I making?

Piri piri chicken, dressed potatoes, rocket salad and quick (yeah right!) Portuguese tarts. Well, actually they would be quick if you weren't trying to do a million other things at once!

As I result, I put all the sugar in the custard mixture rather than saving most for the caramel. They were still good though. A bit sweet, but nice. That'll teach me that I need to read all the instructions rather than just look at the list of ingredients.

Would I make this piri piri chicken again?

Anyway, despite the unrealistic timings, this menu was good and I would make it again. Next time though, I wouldn't aim to make everything in half an hour. I wouldn't follow the order given in the book. Sorry Jamie.

I would make the piri piri sauce and the filling for the tarts first so I wouldn't be rushing with too many things at the same time. I would then have a bit more time to clear up during the cooking process so the kitchen wouldn't look like such a bombsite afterwards.

Can you adapt the piri piri chicken recipe?

Yes, and I often do! These days I tend to just make the piri piri chicken and serve it with jacket potatoes or rice. If I have time I like to marinate the chicken in the piri piri sauce before cooking it. After all, marinades just make food so much more tasty!

An hour is enough to marinate it but if I'm organised enough then I like to make the marinade the night before so it has 24 hours to fully marinate.

If you want you can add extra vegetables as well as the peppers.

If you don't want the dish to be too spicy then remove some of the chilli seeds or use milder chilli peppers.

You can replace the chicken breasts with thighs or drumsticks. They'll stay moister than the chicken breast but will need to be cooked for longer. I cook them in the oven for at least 30 minutes to make sure they are cooked through.

You may think Jamie Oliver has simplified the recipe enough but I often take a short cut and miss out step 2. I marinate the chicken and then just put everything in a roasting dish and cook it in the oven for 30-40 minutes

Over the years I've cook a lot of Jamie Oliver's recipes and I do have quite a few of his cookbooks. Some of the recipes on Searching for Spice that I can recommend are: 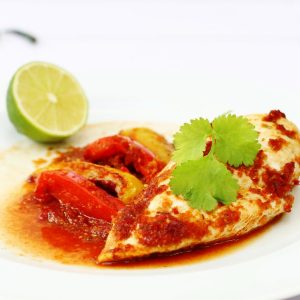 Ingredients for the Piri Piri Sauce