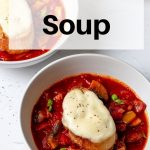 Soup or pizza? Or how about combining them both with this delicious pizza soup recipe? It has to be the ultimate comfort food choice for an easy tasty dinner!

I love soup and I love pizza. How about you? I know I'm not alone. Well, one of my kids won't eat pizza but most people I know love it. Pizza is a favourite comfort food for so many people and soup is just so warming and healthy, especially when homemade. So, why not combine soup and pizza?

It's not as crazy as you think!

The great thing about this pizza soup recipe is that it really does have ALL the flavours of pizza in it. It also has melted cheesy toast floating on the top of the soup! Like a mini pizza on top of a bowl of comfort food soup. Can you imagine anything better?

This pizza soup recipe combines two of my favourite easy weekend lunches: homemade soup and cheese melted on toast. What I hadn't done before was put them together.

The inspiration for this recipe

I have to admit that the idea to call this pizza soup was not all mine. But as soon as I saw it I just knew I just had to follow up on it. I took the basic idea from Jane's Adventures in Dinner and made quite a few adaptations. The original recipe contains chorizo instead of salami, wine and stock.

Ingredients for this pizza soup recipe

How could you vary this pizza soup recipe?

Another popular pizza topping is pepperoni so why not use pepperoni instead of the chorizo? Or use bacon or ham.

If you want to make it into a vegetarian soup then leave out the chorizo. You could add a pinch of smoked paprika to get that same smoky flavour.

You could also vary the vegetables a little. Sweetcorn would go well as would some diced aubergine (eggplant) or courgette (zucchini).

Trust me, this soup really does taste of pizza! The soup soaks into the cheesy bread too making it a delicious sponge for all those Italian flavours.

Can you make this soup in advance?

You can make the soup in advance but it's best to make the cheesy toast topping when you are going to eat the soup. They are not as nice if you have to reheat them.

If you have leftover pizza soup then it will keep for at least three days in the fridge in a covered containger. You can reheat it in a saucepan or in the microwave.

Can you freeze it?

Yes, this recipe does not make a huge batch of soup but you can increase the quantities and then freeze some of it for later. Before eating, defrost it in the fridge overnight and then reheat in a saucepan or the microwave.

Why not try my classic tomato and basil soup recipe? And if you really like soups then do have a look at my collection of soup recipes. 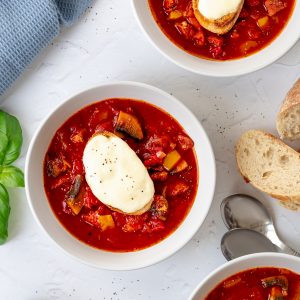 Corina Blum
Soup or pizza?  Or how about combining them both with this delicious pizza soup recipe?  It has to be the ultimate comfort food choice for an easy tasty dinner!

I have linked this recipe to #CookBlogShare run by Sisley & Chloe which was hosted by Melissa at melissatraub.com