Beautifully sweet and perfect for a treat, these white chocolate raspberry blondies are great for a tea time snack, an after school snack or dessert. Or just enjoy one mid-morning with a cup of coffee!

I had to do some baking this week. The last cake I made was a fruit cake and my husband doesn't like fruit cakes. Unfortunately we have different taste in cakes and desserts and he feels he gets his favourites made far less often than I make desserts using my favourite flavours. Well that's understandable isn't it?

But this week I had to make something for him. You see, it was his birthday and I promised him I would make something he wanted. He requested blondies. He was specifically thinking of the blondies I have made for him in the past. These blondies.

Well, what's the fun in making something you have made before, even something as delicious as a blondie. I just couldn't stop myself. I just had to do a little experimenting and vary the recipe. In fact, I found a whole new blondie recipe that was just crying out to me to be made. It was a blondie recipe but for white chocolate blondies with freeze-dried raspberries in too. Now, white chocolate and raspberry is a fantastic combination. I ran the idea past him.

How could he refuse? I adapted the recipe from Bake Then Eat and made them quickly before he changed his mind.

I love them. They are soft, moist and cakey. My husband loves the caramelised bits on the bottom where all the white chocolate chips sink to.

As far as I'm concerned I love cake and I would say these are my favourite blondies. My husband still prefers the denser fudginess of my other blondies.

Why not try them and decide for yourself?

How do you make raspberry white chocolate blondies?

These white chocolate and raspberry blondies are so easy to make. There is a recipe card further down the post but basically you first need to melt the butter and set aside.

Whisk the eggs into the sugar until light and pale. Then whisk in the butter.

Gently fold in the flour. If there are any lumps in it then sift it first.

It could not be an easier sweet treat to make!

I haven't tried adding fresh fruit to these blondies but I do think adding some fresh raspberries would work really well in addition to the freeze-dried fruit.

If you store these raspberry blondies in an airtight container they should stay fresh for at least three days.

Can you freeze white chocolate blondies?

Yes, if you want to freeze them, wrap them up in greaseproof paper and put them in an airtight freezer bag. They will keep well for at least three months.

I haven't made many recipes using freeze dried fruit but the ones I have made have all been really tasty.

If you like shortbread then why not try these strawberry flavoured heart shortbread biscuits? Or this vegan strawberry tofu mousse? 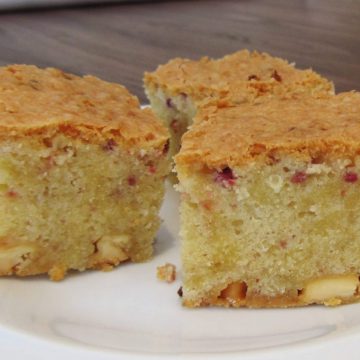 Do let me know if you make these white chocolate raspberry blondies. I love to get feedback from readers.