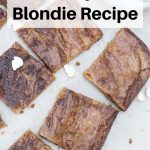 If you're looking for an easy blondie recipe then I have one! This snack is definitely not for diet days but I promise you'll love them. Flavoured with brown sugar and packed with white chocolate chips, they are hard to resist!

What's not to love about blondies? Especially when it's such a simple recipe. I promise you that you'll be able to make this easy blondie recipe in less than an hour from start to finish! Now that is good if you like quick and easy bakes.

For years I was a big fan of homemade brownies. Well, that's never going to change but for a long time I didn't even know what blondies were. In fact, I don't think I'd heard of blondies until I began food blogging and saw them on other blogs. I had assumed that a blondie was just a white chocolate brownie. Well, it is sometimes described that way.

Why are blondies called blondies?

However, after a little research,  it appears that blondies do not have to contain any chocolate at all. Instead they get their flavour from the brown sugar that is used to make them. As they look like brownies but are lighter in colour, they get the name blondies.

Well, blondies may not need to contain any chocolate, but most do and I decided that whatever recipe I used, white chocolate chips were a must. The recipe I used was adapted from Simply Recipes, which actually used butterscotch chips instead of chocolate chips.

Now, these blondies are not at all healthy. They are so super sweet and you really need to cut them into small pieces so they are just a small treat. They are perfect for those days when you don't mind a sugar overload or you have the will power to just eat a little piece!

I won't judge you if you want to indulge though. Everyone needs an indulgent treat at time. My husband loves these and finds it hard to stick at one! And my son would also eat way more than one if I let him too!

What ingredients do you need for blondies?

To make these blondies you'll need:

How do you make blondies?

These blondies are really simple to make. First melt the butter and then whisk it into the sugar and vanilla. You can use an electric whisk or hand whisk.

Make sure the butter mixture is not too hot and whisk the egg in. You don't want the egg to scramble in the butter!

Fold the flour, salt, baking powder and bicarbonate of soda in too. Finally fold in the chocolate chips.

Pour the blondie batter into a 20cm square tin, lined with baking paper. Bake for 20 minutes at 200C

Yes of course, it's always possible to put your own spin on a recipe and this is no exception. Why not use a different kind of chocolate instead of white chocolate chips? You could use fudge or butterscotch chips instead too.

Instead of the vanilla, why not experiment with a different flavour? I haven't tried this but I think they'd be great with something like rum. If you try that let me know!

How to store these blondies?

More of my family's favourite bakes

Here are some more indulgent recipes that my family love: 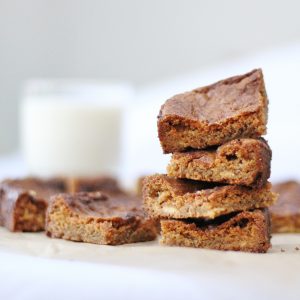 Do let me know if you try this  easy blondie recipe and if you made any changes. I love to get feedback from readers.