2 shares
Jump to Recipe Print Recipe
This chocolate carob cake really celebrates carob as a flavour.   It's rich and fruity and makes an absolutely delicious dessert. 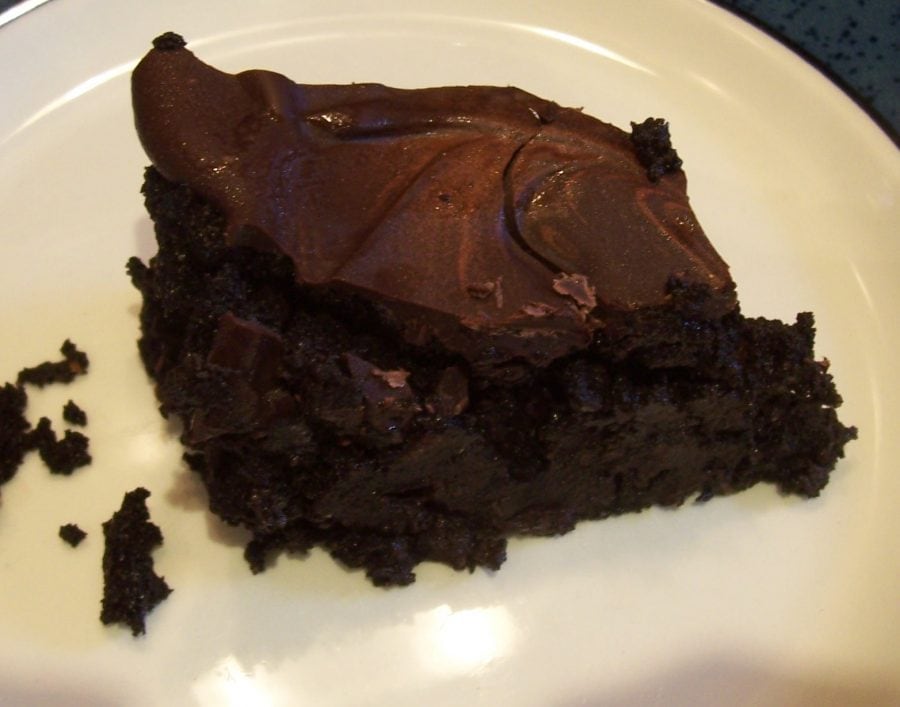 I have decided that there is nothing I like better than recreating a favourite dish after a holiday. And when that dish is as interesting as this cake then so much the better.
I left Croatia a couple of weeks ago, having made a new discovery. That discovery was carob. It wasn't a completely new discovery. When I was in my early teens, my sister made something with carob in. I say something as I have completely forgotten what it was.  It could have been a cake, biscuits, whatever, but it's not important.
At the time I asked what carob was and was told it was a substitute for chocolate.  Of course, I was imagining some sort of delicious chocolatey dessert and when I tasted it, and it clearly wasn't chocolate, I was very disappointed, as would any adolescent be.

The Croatian Inspiration for this fruity chocolate carob cake

I decided carob was not for me, and I would probably not have tried it again except for that fact that in a lovely Italian restaurant in a suburb of Dubrovnik, I fancied homemade cake for dessert.    There were only two types of homemade cakes.   As I peered into the glass cabinet trying to work out which to choose, I asked the waiter what the delicious looking chocolate coloured one was.   He didn't know the word for carob in English, but it sounded a bit similar.  After he showed me a dried pod and told me it grew in Croatia, I was hooked.   It was a local ingredient and something different.   Maybe it was time to try carob again.   After all, it looked so good.

When it came, I wasn't expecting a chocolate cake, and so I wasn't disappointed.   I tasted it to see if I liked it, trying to work out what it tasted of, but I couldn't really say it tasted like anything else I knew, but it did taste really good.   I loved it, but apart from the carob, I couldn't quite work out what it had in it.  There definitely wasn't chocolate in the cake although there was a layer of melted chocolate on the top.  For that reason I have called it a chocolate carob cake.
That first night was near the beginning of our holiday, and I kept thinking back to that fruity carob cake.  We ate in lots of places, in the old town of Dubrovnik and near our hotel, but I didn't have another dessert I liked quite as much, and I was still mulling over what the ingredients were in that carob cake.   We decided to go back.   Once again we had a lovely meal, with a chilled relaxed atmosphere and at the end of the meal I finished with the carob cake.    It was just as good as I remembered.   But I still couldn't quite work out what it had in it.  Well, apart from the carob!

Carob is not a substitute for Chocolate!

A few days passed.  We went home and I looked for chocolate carob cake on the internet.  However, all the cakes seemed to use carob as a substitute for chocolate.   I wanted a recipe for a cake that would celebrate carob as an ingredient in its own right.  I didn't mind a cake containing chocolate.  But, I just didn't want it to pretend that carob could replace chocolate.   After all, why not have both in a cake?  They may be the same colour but carob and chocolate are not the same!
Also, none of the recipes I found sounded quite right.   And so, having kept the card, I emailed the restaurant, not even knowing if I would get a response.   Then, about 24 hours later, I got a reply.   Srdan had very kindly taken the trouble not only to reply but also to translate the basics of the recipe into English.
I danced around the living room! I was a little bit unsure of what was meant by some of the ingredients, but I experimented and followed the basic method.   The chocolate carob cake I ended up with didn't taste exactly the same as in the restaurant, but it was similar.  It still had that carob flavour, distinct from chocolate.   The texture was also different.   Mine was crumblier, not as solid as the restaurant one and the bits of apple were juicier.

How did I adapt this carob chocolate cake?

I didn't have any rum so I substituted it with sloe gin.  I thought it would go well with the fruitiness of the apple and currants, although my cake guinea pigs said they would like to have it with rum next time.  Even so, all my taste testers liked it although they didn't agree on everything.  One of them thought the apple needed to be cooked more before going in the cake but the other one liked the little cubes of juicy apple.
Overall, there is room for some more experimenting with this cake before I declare it an absolutely final recipe. I would quite happily make it and eat it again as it is but I think I'll experiment with preparing the apple in different ways.   There was also one ingredient that  stumped me - flavour.   Was it a misspelling of flour?  Or was it something else?   I could have asked, but I was enjoying the experimental nature of the whole challenge - so I decided to use ground almonds.    After all, why not?

Where to find the original version of this carob cake

If you ever get the chance to go to Dubrovnik, and if your hotel is in Lapad,  I would strongly recommend the Konoba Atlantic.   There are a lot of hotels in Lapad and a lot of restaurants, many of them on the main pedestrianised road leading to Lapad beach, but this restaurant was a clear step above these.   It was on a very quiet residential road, running parallel but behind the main road.   Unless you knew it was there, you wouldn't just wander across it, and because of that the quality and service were of a much higher standard and meant we had a much more enjoyable meal out.   Delicious bruschetta, homemade pasta, and of course for me, the star of the meal, the chocolate carob cake.  Konoba Atlantic can be found on Kardinala Stepinca 42, Dubrovnik and after googling it in 2018 I believe it has changed it's name to Atlantic Kitchen.

Are you still wondering about the mystery ingredient?

Well, Srdan has since got back to me and the mystery ingredient, flavor, was actually a typing error for flour.  Next time I'll try it that way and let you know how it turns out.   I imagine it will be less crumbly and with a more similar texture to in the restaurant, but the taste should be almost the same. 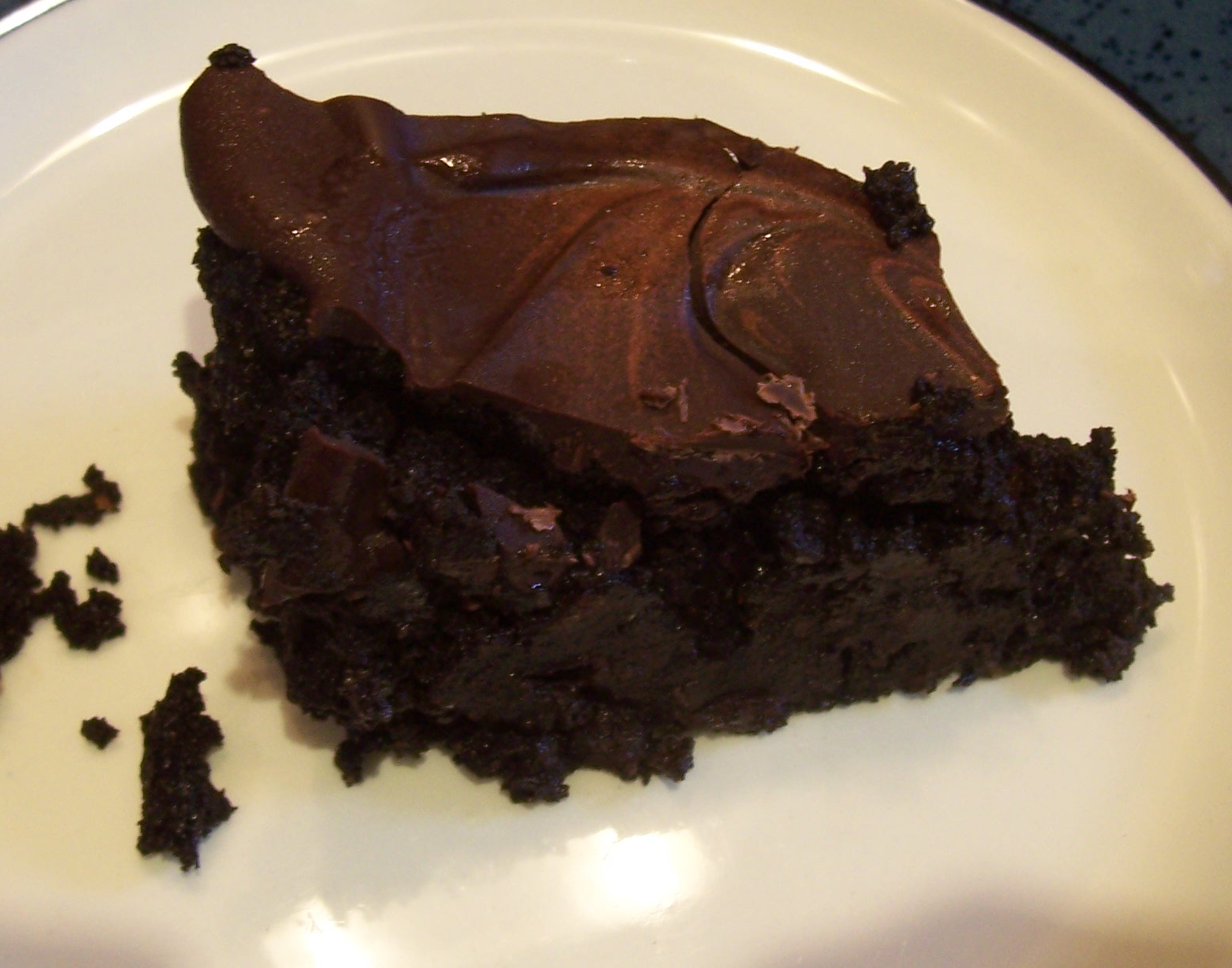 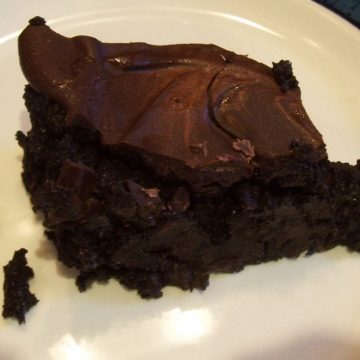 If you like the sound of this fruity carob cake then why not try one of my other fruity cakes?

Do let me know if you make this chocolate carob cake recipe.  I love to get feedback from readers.

Why not signupto my weekly newsletter too.   I’ll even send you a FREE printable.