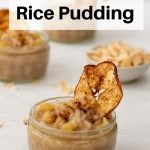 Fruity, sweet, creamy and with a hint of cinnamon, this apple and coconut rice pudding is a delicious warmly spiced dessert. It's easy to make with risotto rice and if you're looking for a comfort food pudding then it'll definitely warm you up.

I hadn't eaten rice pudding for a long long time when I first made this dessert, probably not since I was a child. Rice pudding is a very traditional pudding and I remember my mum used to make it.

It wasn't quite like this rice pudding though, I'm certain it didn't contain any spices. And spices are what I believe can make such a big difference to this type of comfort food pudding. Don't you agree?

What ingredients are in this rice pudding?

Can you use risotto rice in rice pudding?

Yes, I usually use arborio rice in this rice pudding and it works really well. I discovered it quite by accident as I had difficulty getting pudding rice a few years ago.

The rice breaks down in the rice pudding in a similar way to pudding rice.

I haven't tried carnaroli rice or paella rice in rice pudding yet but I'm sure they would also work as alternatives.

A great recipe to make with leftovers

When I first developped this risotto rice pudding recipe it was as a way of using up some leftovers. I had some leftover coconut milk and just one apple. I actually tried it as an experiment but it was one of those experiments that was so tasty it had to be recorded and made again!

By the way, here are some more recipes you can make with leftover coconut milk.

The risotto rice, apple and desiccated coconut mean this rice pudding has some great texture to it, but it is still creamy. The cinnamon which goes deliciously with the apple makes it super warming and comforting too.

If you want to cook a larger batch of this rice pudding then you can keep the leftovers in the fridge for at least 3 days. It's then great to eat cold or you can reheat it.

I usually reheat it in the microwave but you can also reheat it in a saucepan on the hob. You may need to add a little extra liquid to stop it sticking though.

Can you freeze rice pudding?

Yes, any leftovers can also be frozen for a maximum of 3 months. Defrost it in the fridge and then reheat it in the microwave or a saucepan.

This is currently the only rice pudding recipe here on Searching for Spice. However, I do have some more comfort food puddings that are great to eat warm so how about: 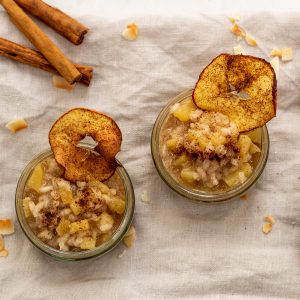 Corina Blum
Fruity, sweet, creamy and with a hint of cinnamon, this apple and coconut rice pudding is a delicious warmly spiced dessert.   It's easy to make and if you're looking for a comfort food pudding then it'll definitely warm you up.