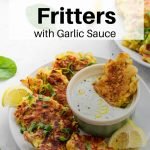 These tasty leek fritters with garlic sauce make a delicious appetiser or even a light meal. They're fairly easy to make and taste a little bit like onion bhajis.

I first made these leek fritters quite a few years ago and they are slightly adapted from a recipe in Plenty by Ottolenghi. It was a long time ago, just after I'd first heard of him on Masterchef and his name kept cropping up everywhere. People were raving about his books and his dishes. Whenever I read one of his recipes online I wanted to try it.

Without consciously trying to, I have a few meat-free days most weeks. What I like about Ottolenghi is that he loves making vegetables interesting and you don't feel that anything is missing.

I told my husband that I wanted Plenty for Christmas. I don't think he was quite as enthusiastic as I was, especially as he called me from the book shop saying, was I really sure I wanted Plenty? What about a rather nice book on Spanish food by I can't remember who now? Or what about Ottolenghi's other book that had some meat dishes in as well?

So, when Dom's Random Recipe Challenge for January was to cook from a new book, this was the book I picked up. And of course, my lovely husband was even less delighted when the recipe I picked had leeks as the main ingredient.

Despite the leeks, my lovely husband liked these. However, he did compare them to onion bhajis and asked if I could make them just with onion next time.

These are the ingredients you'll need for the garlic sauce:

To make the fritters you'll need:

How do you make these leek fritters?

Looking at the list of ingredients you may think these will be complicated to make but that's not true at all.

Make the sauce first by blitzing all the sauce ingredients in a food processor or blender.

Slice the leeks thinly and fry them gently in a pan with the onion and chilli pepper. Then stir in the herbs and spices.

Separate the egg and whisk the egg white to form soft peaks. Fold the egg white into the leek mixture. These helps to keep the texture of the fritters light and airy.

Put all the flour, baking powder, salt, sugar, egg yolk, milk and melted butter into a bowl and whisk together to form a batter.

Then mix the leeks into the batter.

Heat a saucepan with about 1cm of cooking oil. Put spoonfuls of the leek batter into the oil and cook for about 2 minutes on each side on a medium-high heat.

You'll probably need to cook this amount of mixture in 2 batches. Drain the fritters on some kitchen roll when you take them out of the oil.

What can you serve with them?

Well, the garlic sauce is delicious with them along with lots of salad and bread. Any bread works well. Crusty bread, wraps or pitta breads are all great with these fritters.

I also like to serve some lemon wedges alongside them as they are great with some freshly squeezed lemon juice as well as the homemade garlic sauce.

Of course, if you don't have time or don't have the ingredients then don't feel you have to make the garlic sauce at all.

Can you adapt these leek fritters?

Yes of course. I know these are called leek fritters but you could just make them with lots of onions instead of the leeks and call them onion fritters.

Storing and reheating the leftovers

Yes. I usually freeze them on a baking tray covered in baking paper. Once they have frozen you can transfer them to a freezer bag. They will keep for at least 3 months.

You can bake them in the oven from frozen. They will take about 10 minutes at 180C

If you like these leek fritters then why not try one of these recipes:

And if you like leek recipes then do try these savoury leek pancakes! 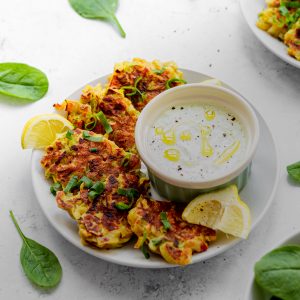 Ingredients for the Leek Fritters

How to Make the Garlic Sauce

How to Make the Fritters