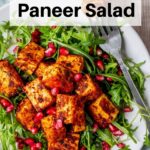 Have you tried paneer in a salad? Healthy and tasty, this marinated paneer salad is a different way to serve paneer but just as tasty. It makes a delicious healthy midweek recipe.

I often make salads with cheese and I often cook Indian food. Although I often marinate the meats I am using, I don't tend to put as much preparation into vegetarian options. So, I decided something needed to change!

I decided it was time to try paneer again and give it the type of marinade I might use on a piece of chicken. Why not? Paneer soaks up the flavours of a marinade beautifully and although I typically eat it in a curry, it really is a great cheese to eat as part of a salad too.

The inspiration for this Indian paneer salad came from a SaveraPaneer recipe card. I adapted the recipe from a chermoula marinated paneer, apricot and rocket salad.

What ingredients do you need for marinated paneer salad?

Plus for the salad I used:

How to make this marinated paneer salad

First mix up all the ingredients for the marinade in a food processor. Chop the paneer into cubes and place in the marinde for about an hour.

When you're ready to prepare the salad, heat a little oil in a frying pan and fry the paneer cubes for a few minutes on each side until browned slightly.

While the paneer is cooking, stir the remaining marinade into some yogurt along with some chopped cucumber. It's a great way of not wasting any of the marinade ingredients. Plus, it makes a really delicious raita-type sauce to go with the marinated paneer salad.

Can you adapt this paneer salad?

Feel free to vary the spices in the marinade. You can also use different salad leaves instead of rocket (arugula) and add tomatoes, cucumber and sliced onions.

I know this is a vegetarian recipe but this marinade works equally well on chicken.

This salad makes quite a light meal by itself so I love to serve it with some kind of bread to make it more substantial. It's especially good stuffed into a pitta bread or rolled up in a flatbread.

How to stop the paneer going dry?

When I first made this salad I hadn't cooked paneer like this before and I found it was slightly dry if I ate it by itself. It needed the raita to go with it.

I've since experimented more with cooking marinated paneer and found that the trick is to cook the paneer quickly on a high heat. This stops it from drying out.

If you store the leftovers in an airtight container in the fridge it should keep for at least 2-3 days. Personally, I like to serve this salad with warm freshly cooked paneer. Although you can store and eat the leftovers, I would recommend that you eat the paneer when freshly cooked.

However, if you are reheating it, you can just pop it in the microwave for a minute. If you have an air fryer, you could also air fry it to reheat.

If you like this marinated paneer salad you might also like one of my halloumi salads. I've got a halloumi, vegetable and pomegranate molasses salad as well as a halloumi salad Mexican style! I hope you like them. Do also check out my recipe collection of main course salad recipes! 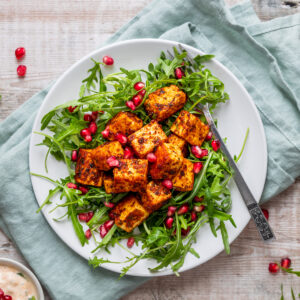 Ingredients for the Marinade

Ingredients for the Salad

Do let me know if you make this marinated paneer salad. I love to get feedback from readers.