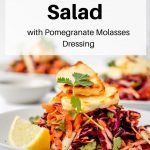 This halloumi and pomegranate molasses salad is a perfectly balanced mixture of sweet, sour and slightly salty. It makes a delicious and healthy light meal and is a great way to get more of your 5 a day!

Do you ever get vegetable cravings?

I had a craving for vegetables at the weekend. It was probably due to feeling guilty at eating nowhere near the now-recommended 7-a-day. I used to easily eat 5 a day but have been a bit lazy recently.

When I thought about it I realised that the only fruit and vegetables I had eaten all day were 2 small clementines. An unhealthy dinner would just have to put be off until the next day. Vegetables were in order.

This halloumi and pomegranate salad is thanks to a fridge clear out!

After looking in the fridge and looking at all my bottles of sauces, I actually started to feel excited about creating something healthy. There was a bottle of pomegranate molasses that I had barely touched for months. Well, apart from when I added some to the tonkatsu sauce I made recently.

There was also some slightly wilted coriander. I knew it would be great in a curry but it was still green and tasted ok so I decided that could go in too. There was also had a pot of sumac in the cupboard. I love the lemon flavour of sumac and before long my salad was beginning to take shape.

Now, a girl can't just live on salad! ! Luckily I had some halloumi in the fridge. Halloumi is quite salty but because of that it goes really well with the sweetness of the pomegranate molasses and the sourness of the lemon juice. In fact, my husband always says it reminds him of bacon!

As I said, halloumi is fairly salty and it also contains a high amount of saturated fat. But, it's also a great source of calcium as well as many vitamins and minerals including zinc, selenium, magnesium, vitamin A and many of the B vitamins.

It's a great vegetarian choice as part of balanced diet, as long as you don't eat too much of it.

Have you tried pomegranate molasses?

It's sweet, sour and tangy and different brands can vary in sweetness. If you haven't had pomegranate molasses before, then just add a little and then add more to taste afterwards.

It's a really versatile ingredients and there are so many ways to use it!

How could you adapt this halloumi and pomegranate salad?

As I said, this salad came about as I was trying to use up ingredients in the fridge. It was then so good I had to write it down! So, don't feel you have to add exactly the same ingredients.

For the coleslaw type base then you can use different vegetables that you might add to a coleslaw. White cabbage, celeriac or beetroot would also work. You can also use red or brown onions instead of spring onions.

Instead of dry frying the halloumi you can cook it under the grill. Just grill for about 2-3 minutes on each side.

If I'd had a pomegranate at home, a few seeds sprinkled over the top would have been perfect. In fact, I really recommend that you try and get some if you're making this salad.

Can you eat the leftovers the next day?

The salad keeps well until the next day and is just as delicious. I always try to make more than I need so I can eat the leftovers for lunch. If it has the dressing on it can go a little soggy if you keep it for longer than that though.

I also prefer not to cook the halloumi in advance. I think halloumi is so tasty when it's still warm and it's not quite the same to eat the next day. If I have no halloumi left the next day then I substitute it for feta. 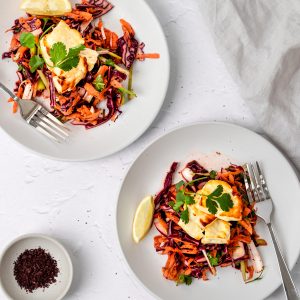