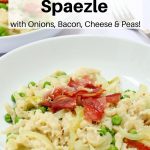 This homemade spaetzle recipe with caramelised onions, bacon and peas makes a hearty meal that's full of flavour. It's perfect as a rustic German alternative to traditional pasta.

Don't you just love it when you haven't thought of something for a while and then you get reminded of it and the opportunity to make it. That's exactly what happened with this month's Daring Cook's challenge. The task was to make homemade pasta without using any motorized machinery. One of the suggestions was spaetzle. Now, why hadn't I ever thought of making spaetzle before?

The last time I ate spaetzle was back the nineties  in my year abroad in Germany. It was in a restaurant and as far as I remember it was served with loads of cheese, bacon and leeks.

It was heavy but delicious. The melting cheese and leeks clinging to the spaetzle. A really hearty meal. With that in mind,   I wanted to make a dish similar,  but if possible, not quite as heavy. Well, I'm not sure if I managed that but I did add some peas and serve it with a huge spinach salad.

A recipe was provided for the spaetzle but it didn't look anything like the spaetzle I remembered. I searched around online and came across Step by Step Cook with very clear pictures and step by step instructions. The only hiccup was that the recipes required you to have a spaetzle press. But looking at it, it was remarkably similar to my new potato ricer. I wondered!

What equipment do you need to make Spaezle?

When I first pushed the dough through the ricer into the water I was a little worried as a lot of the pieces seemed to stick together. However, as they cooked I prodded them a bit and most of them separated again.

Spaetzle is supposed to be very irregular with thinner and thicker strands and knobbly bits so don't worry if it appears to be going wrong, it will almost certainly turn out ok. I was really pleased with the end result and it was much easier than I would have expected before starting.

Try my other homemade pasta recipes!

If you liked my spaetzle recipe then I hope you'll like these recipes too: 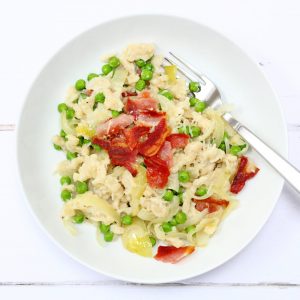 Do let me know if you make this spaeztle or any of my other recipes. I love to get feedback from readers.