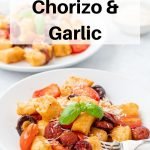 These gnocchi with chorizo and garlic are easy to make and a really comforting dish. A delicious fusion of Spanish and Italian cookery that makes a popular family meal. It's great for midweek or easy entertaining.

I first made this garlic and chorizo gnocchi recipe a long time ago inspired by a recipe made on Masterchef. The poor contestant, Claudia, who made these gnocchi didn't last long in Masterchef. She was out of the show the same week, but not because of the gnocchi!

Oh no, these gnocchi wouldn't send anyone home! In my view, anything with chorizo, garlic and tomato just has to be good. The gnocchi are soft and pillowy and the garlic and chorizo sauce is full of flavour. It also smells amazing as it's cooking.

What ingredients are in garlic and chorizo gnocchi?

How do you make the gnocchi?

Gnocchi are actually easier to make than you might think. Start with cold mashed potatoes. Make sure they are well mashed with no lumps. I usually use a potato ricer and then sometimes even pass the potato through a sieve, although this is not absolutely necessary.

Then put the mashed potato, flour, egg and seasoning into a large mixing bowl. I usually stir with a spoon first to combine and then turn it out onto a floured work surface and knead for a few minutes until smooth. Make sure there is lots of flour on the work surface and your hands to stop the dough sticking to your fingers.

Then roll pieces of the dough into sausage shapes about the thickness of a finger. Cut into pieces about a centimetre long and place on a floured tray. Put the tray in the fridge to rest for about half an hour before cooking or put in the freezer if you are making them further in advance.

When you are ready to cook the gnocchi, bring a pan of water to the boil and drop the gnocchi in. Boil them for about 3 minutes. They should rise to the surface when they are cooked.

At the same time as you are cooking the gnocchi, make the sauce. It also cooks really quickly. Put the chopped chorizo into a dry frying pan or wok and cook until it begins to brown. Then add the garlic. Stir fry it with the chorizo and finally add the tomatoes.

Serve with a spinkling of parmesan and some fresh basil if you like.

Can you adapt this gnocchi recipe?

Yes you can! Although i have to admit that I rarely do. After all, when you find a perfect gnocchi sauce, you want to spend more time with it.

This chorizo and garlic gnocchi is already such a simple dish with only three real ingredients in the sauce. It's hard to adapt it without changing the dish completely. However, you could add a little onion or some thinly sliced leeks to the sauce. Even a few slices of pepper would go well.

If you have run out of chorizo or don't like the smoked paprika in it then why not try using smoked bacon lardons instead?

If you like spicier food then add some sliced red chillies along with the garlic.

If you don't want to make the gnocchi but love the sound of these flavours, just serve it with pasta or shop-bought gnocchi. You could also serve this sauce with my leftover roasted vegetable gnocchi.

If you have leftovers for this garlic chorizo gnocchi dish you can store them in the fridge for a couple of days and then reheat in the microwave.

If you want to freeze the leftovers then put them in an airtight container and freeze as soon as they have cooled. Defrost thoroughly and then reheat in the microwave or the oven until piping hot. It is best not to freeze for longer than a month as cooked gnocchi tends to go a bit mushy when defrosted and reheated.

Can you freeze uncooked gnocchi?

Yes. I often made extra gnocchi for the freezer. After making them, put them on a baking tray in a single layer and put them in the freezer. Once they have frozen you can transfer them to a freezer bag. It's then simple to cook the gnocchi directly from from frozen.

As making gnocchi is a bit more effort than a lot of recipes, it is a good idea to do this.

If you love the flavours in these gnocchi but don't want to actually make the gnocchi then why not try my easy tomato and chorizo pasta? It makes a deliciously easy midweek meal.

Another similar recipe is this tagliatelle with chorizo, garlic and sundried tomatoes. If you're feeling adventurous I've even got  a recipe for homemade pasta with chicken paprikash! Or why not try a Polish style pasta and have a go at these pierogi ruskie? 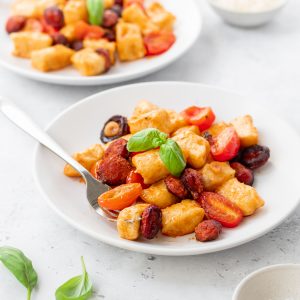 Gnocchi with Chorizo and Garlic

Do let me know if you make this gnocchi with chorizo and garlic. I love to get feedback from readers.