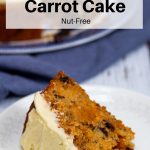 This yummy vegan carrot cake is delicious, full of spices, raisins and grated carrot. It's so moist you'll definitely want another slice. It's also nut-free making it perfect for those on vegan and nut-free diets, as well as everyone else of course!

This means if I'm making a cake to eat at home, I feel I should take his tastes into account. At least some of the time. However, if I'm taking a cake to cake club, I can make whatever I like and still get to enjoy it! I love cake club for this.

Bring on fruity spiced cakes! For my first cake club I made an apple, cinnamon and caramel cake. I still hanker after a slice whenever I'm reminded of it! Give me that or carrot cake any day over chocolate cake or a plain madeira cake. Not that I'd say no to any cake in reality though.

This vegan carrot cake is just as good as a non-vegan cake!

Did I mention that this nut free carrot cake is vegan? I'm not vegan and this is my first vegan cake. Or at least it was the first time I made it! I've made it a few times since then.

I have to admit that I was a little worried about whether it would turn out ok or whether I'd be thinking there was something missing. I needn't have worried.

The Inspiration for this vegan carrot cake

This recipe is slightly adapted from a vegan carrot cake recipe on the Vegan Society website.  After all, that seemed a good place to start looking.

Maybe I cheated a little by making a carrot cake for a vegan challenge as lots of carrot cake recipes use oil anyway instead of butter. I used rapeseed oil for this cake but I think it would be nice to experiment with coconut oil another time.

What ingredients do you need for this carrot cake?

For the icing I just use vegan butter, icing sugar and vanilla extract.

The recipe I used didn't contain any replacement for eggs but as I love chia seeds so much at the moment I added a spoonful. You can make a proper chia egg by letting the chia seeds sit in double the amount of water for 5 minutes before using.

I didn't think that was necessary for this recipe though. The texture is great without doing anything extra.

Can you adapt this cake

I don't tend to change this nut-free carrot cake too much but you can make small changes. Why not use soft brown sugar instead of caster sugar? It really accentuates the autumnal spicy caramel flavours.

Instead of just raisins you can add a mixture of raisins and diced dried apricots.

Do you need any special equipment?

If you have a cake tin, a wooden spoon and a mixing bowl you can make this cake.

However, when making the icing it is easier to get a smoother, lump-free texture if you make it in a food mixer.

I store this cake in an airtight container in the kitchen and it keeps well for at least 4 days.

You can also freeze it for up to three months. Wrap it up well in baking paper and put it in an airtight freezer bag.

If you freeze it, it's best to freeze it without the buttercream icing and then decorate it when you drefrost it.

Personally, I don't think you even need to use the buttercream. I love carrot cake without it too.

I've also used chia seeds in these non-vegan lemon and raspberry muffins and these chocolate chia ones . Although chia seeds are traditionally used in vegan baking I love the slight crunch they give to these two recipes.

I'd love to experiment more with vegan cakes so please let me know in the comments about your favourite vegan cakes and what replacements you use for eggs and butter. 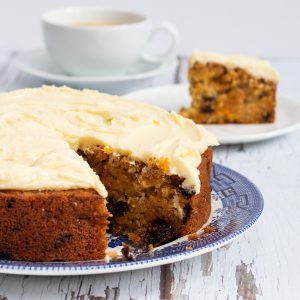 Do let me know if you make this vegan carrot cake. I love to get feedback from readers.