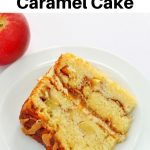 This beautiful apple cinnamon and caramel cake is perfectly spiced and delicious for everyday or for a special occasion. Two layers of cinnamon apple sponge cake sandwiched with cinnamon buttercream and caramel then topped with more caramel, it's the perfect cake for autumn baking.

If you've never tasted an apple cinnamon and caramel cake before then trust me, you are missing out! I know there are lots of delicious cakes out there, many of them involving apple, but if you add cinnamon to the apple it is just so much better and if you go one step further and add some smooth dulce de leche you will get the most yummy cake you have eaten in quite some time. Trust me.

Although I have a lot of apple and cinnamon recipes on here, I think this is the first time I have added caramel into the mix too. Caramel is the perfect partner for an apple and cinnamon cake. It also makes the cake just that little bit more indulgent than it would otherwise have been.

And I guess I should apologise here too because this apple cinnamon and caramel cake really is indulgent. It isn't a cake to make in diet week. Unless you slice it very thinly and that is hard because you will definitely want a generous slice.

What is this easy cinnamon apple caramel cake like?

This cake is made up of two layers of moist light sponge cake with pieces of cinnamon coated apple in the cake. Between these two layers there is a drizzle (Or you could make it a blanket) of caramel or dulce de leche. It's sweet and sticky and goes perfectly with the deliciously smooth cinnamon buttercream that also snuggles in the middle of the cake!

On top of the cake there is another drizzle of dulce de leche. It finishes this easy apple caramel cake off perfectly.

Apple cake. Buttercream. Dulce de leche. The combination is sinfully good. It's a cake you won't want to share but also a cake that you won't be able to eat all to yourself.

Unless you intend to eat this apple cinnamon and caramel cake all at once, it will keep for about 3 days. Just store it in a cool place in an airtight container. Enjoy!

Can you freeze this cake?

If you want to make this cake in advance and then freeze it, it is best to just freeze the apple sponge cake. Defrost the cake at room temperature and then decorate it after it comes out of the freezer.

The recipe is adapted from Food Network. 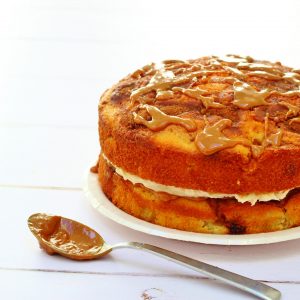 For the Apple Cinnamon Cake:

For the Filling and Topping

For the Cinnamon Buttercream:

Apple is so good in bakes but sometimes you want  a change. If so, try one of these delicious berry filled bakes?