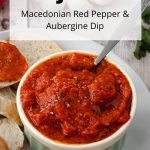 Ajvar is a tangy sweet and sour red pepper and aubergine dip from the Balkans. It's so versatile. Use it as a spread, a sauce or a salad dressing even. This recipe has a touch of chilli heat too!

I love making different kinds of dips and sauces for spreading on bread and toast as well as eating with salads of raw or roasted vegetables. I often make different varieties of hummus such as carrot and pea and love looking around the world for inspiration, making recipes such as muhammara and baba ghanoush, from Lebanon.

I first came across ajvar quite a few years ago. It's especially popular in North Macedonia and Serbia but variations of it can be found all over the Balkan region. What attracted me to it was the smoky peppers and roasted aubergine in it. I am also a huge fan of anything garlicy and so the addition of garlic definitely made me want to try it out.

Ajvar is also a very easy dip to make. You do need to prepare it in advance though, especially if you want to have time to chill it before serving. Basically you need to roast all the vegtetables, remove their skins, blend them and then simmer for a while before seasoning with salt, pepper and white wine vinegar.

That may sound like a lot of prep for a simple dip or spread but trust me, this ajvar is worth it and each step takes very little effort.

What ingredients do you need to make ajvar?

How to make ajvar

Ajvar is pretty simple to make but there are a few steps involved. Firstly you need to roast all the vegetables till they are soft and the skins are blackened. You can roast them in the oven, barbecue them or put them in the air fryer.

When the vegetables come out of the oven, put the peppers in a food bag to rest for about 10 minutes. This will make it easier to remove their skins.

You can scrape the flesh out of the aubergine skins almost straight away. Also squeeze the garlic out of the cloves.

When you remove the skins and seeds from the peppers you might find that quite a few seeds are sticking to the peppers still. If so, dip them in some water quickly and all the seeds will float off.

Put the peppers, aubergine flesh, garlic and chilli in a food processor and blitz briefly to form a puree.

Transfer this to a saucepan along with the oil. Simmer gently for about half an hour. When ready, season with the salt and pepper and stir in a little of the vinegar. Keep tasting it to check you have the right amount.

Chilli in the fridge until ready to serve.

Can you adapt this ajvar recipe?

The only way I would adapt this recipe is whether to add the chilli pepper or not. This ajvar recipe is absolutely delicious whether it has any heat in it or not!

If you just have a small chilli pepper rather than a larger one, you could simmer it at the end rather than roast it in the oven with the other vegetables.

Of course, you could make further adaptations but that might mean that you don't actually have ajvar in the end but another equally delicious dip or spread. For example you could add onions or tomatoes to the roasting tin along with the peppers and aubegine.

How long does ajvar stay fresh?

If you keep this in a covered container in the fridge it will keep for about a week.

Can you freeze ajvar?

More recipe for dips and spreads

I've mentioned a few earlier in this post but here a few more delicious dip recipes:

Corina Blum
Ajvar is a tangy sweet and sour red pepper and aubergine dip from the Balkans. It's so versatile. Use it as a spread, a sauce or a salad dressing even. This version has just a touch of heat from the chilli pepper too!
5 from 1 vote
Print Recipe Pin Recipe
Prep Time 10 mins
Cook Time 1 hr
Total Time 1 hr 10 mins
Course Side Dish
Cuisine Macedonian, Serbian
Servings 4
Calories 159 kcal

Do let me know if you make this ajvar or any of my other recipes. I love to get feedback from readers.