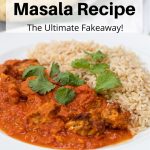 This creamy chicken tikka masala is the best way to satisfy those takeaway cravings without having to order anything! It's an indulgent (but not unhealthy!) curry that is not too hot but you can easily spice it up too! That makes it perfect for your next family curry night.

As a huge curry addict, I recently realised this site was missing the most famous curry of all.

The origins of chicken tikka masala

Here in the UK, chicken tikka masala is almost a national dish. It is definitely the top Indian takeaway choice.

Funnily enough it wasn't actually created in India. Apparently it was first made in a restaurant in Glasgow back in the 70s.

Why is this chicken tikka masala so good?

Well, it's got a creamy sauce and there is definitely something comforting about that. Despite being creamy, it is not too rich. Just three tablespoons of cream are enough to make it creamy without it being too heavy.

It's full of spice but not overly fiery. That means it's a curry that will satisfy those who can't handle too much heat but it's also possible to dial up the heat for those who do like a more fiery curry.

If you have children, it's a great curry for them too. As long as they like their food to be a little spicy they'll love this! My kids are both huge fans of this curry and love seeing the chicken on the skewers too.

How do you make chicken tikka masala?

The chicken is cooked separately from the curry. Traditionally it would be cooked on skewers in a tandoor oven. I usually bake it in the oven but I don't always bother with the skewers, although they do make it easier to turn the chicken over in the middle of cooking. You can also cook it on a griddle pan. This makes chicken tikka.

As the chicken is cooking, I make the sauce. It's a fairly basic curry sauce with a base of cooked onions, garlic and ginger.

Then the spices are added. I use coriander, cumin, turmeric, cayenne pepper and garam masala. There are of course tomatoes. I use tinned tomatoes and tomato puree.

At the end you add the chicken and a little cream to the sauce.

If you like sprinkle on some fresh coriander leaf when you serve it.

There are lots of ways to vary this chicken tikka masala recipe. It's a fairly mild curry and I know that's not for everyone. If you want it to be a little hotter then just add a diced fresh chilli at the same time as you add the ginger and garlic.

If you want a healthier option then you can omit the cream or use yogurt instead. Although I have to say, this recipe uses very little cream anyway so is already a much healthier alternative to a takaway version.

If you want a dairy-free version then use a little coconut cream instead of the cream. Or use coconut milk.

Can you make it with leftover roast chicken?

Yes you can, although it wouldn't really be a chicken tikka masala but it would still be a tasty curry.

If you are making this with leftover roast chicken then just make the sauce and stir the leftover chicken in at the end to heat through.

Because the chicken won't have been marinated and won't have any spices on it might not be quite as tasty but it'll still be delicious.

How healthy is it?

Like most homemade curries, this chicken tikka masala is actually a pretty healthy meal.

However, it does contain cream which makes it feel a bit more indulgent than some homemade curries.

That means it's a great choice for when you want something fairly healthy that still has that comfort food vibe.

What to serve with chicken tikka masala

We love plain basmati rice and naan breads with ours. Sometimes I make these nigella seed flatbreads which are a little similar to naans.

Whatever curry we have my husband loves some lime pickle on the side too!

If I'm feeling ambitious I might also make some onion bhajis to go with it!

Like all curries, this chicken tikka masala is a great recipe for batch cooking. Why not make a double batch for another day?

If you do batch cook or just have leftovers then you can keep them in the fridge for up to three days.

I usually reheat in the microwave until piping hot but you can reheat in a sauce pan. You may need to add a splash of water to stop the sauce drying up.

It also freezes well for up to three months. Defrost completely, ideally overnight in the fridge, and then reheat as above.

If you're as much a fan of curry recipes as I am then do check out my recipe collection of homemade curries from scratch. You'll find lots of inspiration and links to all my curry recipes.

Here are just a few of them: 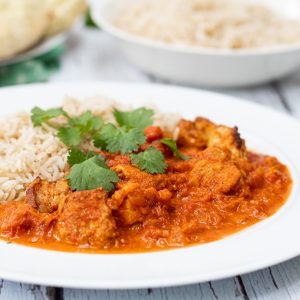 Corina Blum
This creamy chicken tikka masala is the best way to satisfy those takeaway cravings without having to order anything! It's an indulgent (but not unhealthy!) curry that is not too hot but you can easily spice it up too! That makes it perfect for your next family curry night.
5 from 11 votes
Print Recipe Pin Recipe
Prep Time 10 mins
Cook Time 25 mins
Total Time 35 mins
Course chicken, Main Course
Cuisine Anglo Indian
Servings 4
Calories 505 kcal

Ingredients for the Tikka Marinade

Ingredients for the Curry

Nutritional information is approximate and a guideline only. If you want an easier version of this curry then just add leftover roast chicken to the curry sauce.