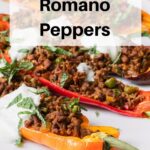 These easy keema stuffed romano peppers are a great way to serve homemade lamb keema curry. The peppers are beautifully sweet and are perfect with the spicy lamb mince filling.

When I'm deciding what to make for dinner, something easy is usually what I go for. And if it's spicy too then it's definitely got my vote!

Using mince is always a good way to make a tasty dinner and one of my favourite recipes to make with lamb mince is a quick and easy keema. It doesn't take as long to cook as a lamb curry and it's easy to add in lots of hidden vegetables too if that's what you want.

I'd usually serve this simple Indian lamb keema with plain basmati rice but this time I've used the keema as a stuffing for sweet romano peppers. Romano peppers are great for stuffing as they don't have too many seeds, the flesh is fairly thin so they cook quickly and of course they are lovely and sweet.

I think they look beautiful and are great stuffed as well as eating on their own or sliced into salads just like regular peppers. Of course, you could use this keema recipe as a stuffing for regular bell peppers too.

There is a full recipe card further down the post but here are some of the steps in brief.

First, heat a little oil in a frying pan and add the whole spices. They will release their flavour and flavour the oil. Then add the onion and cook gently for about 5 minutes until softened.

Add the ginger, garlic and diced chilli pepper. Then add the mince and cook, breaking it up with a wooden spoon as it browns.

Stir in the spices and chopped diced tomato then add a little water too. Simmer for about 15 minutes.

When the keema is cooked, spoon the mixture into the peppers. Place in the oven for about 15 minutes.

How can you adapt the recipe?

As I mentioned earlier, you can use a different kind of minced meat instead of lamb. Minced turkey or beef both work well. You could even replace the minced lamb with a vegan mince substitute.

Instead of stuffing the keema into romano peppers you can use regular bell peppers. They do have a thicker skin though so you will probably need to bake them in the oven for at least and extra 5 minutes.

You can also scoop the seeds from a courgette(zucchini) and put the filling in that. Or how about a large beef tomato?

You don't even need to use this keema as a stuffing for vegetables. You can serve it with rice or chapatis. You can put it on a pizza base to make a spicy meat feast pizza even! There are so many ways you can use this spicy Indian lamb mince.

Can I make it spicier or milder?

Yes of course, remove the seeds from the chilli pepper if you want it to be milder, or omit the chilli altogether. And yes, you can definitely add more chillies if you want to really make it hotter!

The leftovers will keep well in the fridge for at least 3 days. I reheat them in the microwave but you can also reheat the peppers in the oven. They'll take about 8-10 minutes at 180C

What can you serve with keema stuffed peppers?

You can serve these stuffed romano peppers with rice or Indian breads. I also like to serve a big dollop of yogurt or raita with them and some lime pickle or mango chutney too. 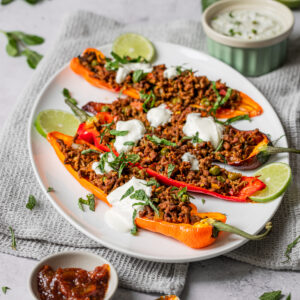 Do let me know if you make these keema stuffed romano peppers or any of my other recipes. I love to get feedback from readers.