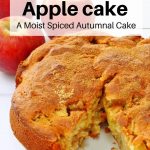 This moist cinnamon apple cake is perfect as an afternoon snack. You can also enjoy it warm as a dessert with cream or ice cream.

I like different times of year for different reasons. As far as baking goes, autumn is the best time of year for me. Fruity spiced cakes and muffins are just THE BEST as far as I'm concerned!

Ok, I love lemon cake and chocolate cake but really, spiced cakes like this cinnamon apple cake are the kind that really make me happy.

Besides being super tasty, spices just make a cake way more comfortingand as the weather gets cooler and the days get shorter, comfort food definitely gets higher on my list of priorities.

The finished cake is so tasty, really soft and moist with pieces of soft apple inside too. It's topped with a slightly crunchy sprinkling of cinnamon sugar. It's just as delicious as you can imagine.

What do you need to make this spiced apple cake?

As well as the ususal cake ingredients of sugar, butter, flour and eggs, this cake also has cream cheese in. The cream cheese helps to keep it super moist and give it a really soft crumb.

It is an apple cake so of course you'll need apples. I use 3 sweet apples, peeled, cored and diced. Don't worry about the apples being perfect. If you have some that are beginning to turn a bit soft, this cake is the best way of using them up.

As well as cinnamon I add a little vanilla too. You can never go wrong with vanilla.

Do you need any special equipment to make this cake?

This cake uses a really simple method and all you need is a bowl and a wooden spoon to beat everything together. I often use a sieve too when adding the flour but you can get away without sifting it.

Can you adapt this cake?

I haven't tried making this cake with other fruit but I'm sure it would work well with pears, diced plums or berries instead. If you try any adaptations like that do let me know how it turns out.

If you don't have any self-raising flour you can use plain flour but increase the amount of baking powder to 3 teaspoons.

If you don't have soft brown sugar then replace it with golden or white caster sugar. It will still work.

This cake will keep well for about three days in an airtight container. Because of the fruit in it, it won't keep well for much longer.

Can you freeze it?

Yes, just wrap the cake in cling film and it will keep in the freezer for up to three months.

The inspiration for this recipe

When I first published this recipe it was as part of a group called the Secret Recipe Club and is inspired by a recipe on Join Us Pull Up A Chair. Since first making it, I've adapted the cake and use a lot less sugar as I found the original recipe to be a bit too sweet. 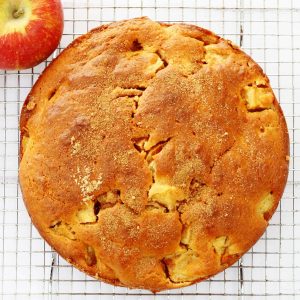 If you like this cinnamon apple cake, why not try one of my other cakes?