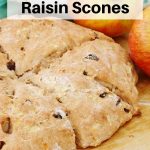 If you're looking to bake some seasonal apple scones then this recipe for apple, sultana and cinnamon scones is perfect. They're so good as an autumnal breakfast or afternoon snack.

Throughout this whole month I've been planning to make scones for a tea time treat but haven't been able to decide what type to make. My favourite scones have always been cheese scones, but I wanted to make fruit scones for a change. I didn't go for an unusual combination, just good old apple, sultana and cinnamon.

Of course, they had to have cinnamon in. I love cinnamon in cakes and desserts and it is wonderful with both apple and sultanas.

Not only that, as these apple scones are baking you get a lovely cinnamon smell in the kitchen. The end result is a very moist scone due to the apple, which you can't really taste but it definitely affects the texture. These scones are beautifully soft and moist.

What ingredients do you need?

You only need 6 ingredients for these easy apple and cinnamon scones. You need apple of course, cinnamon, self-raising flour, sugar, milk and sultanas or raisins.

I use grated apple so it makes the scones lovely and moist but there are no big chunks of apple that the kids will try to pull out!

Of course, if you don't have to hide the apple at all then why not leave a few bigger chunks of apple in the mixture too?

How to substitute the self-raising flour?

How to serve these apple scones?

These apple and cinnamon scones are delicious served warm with a little melted butter. However, my favourite way to eat them is with a little raspberry jam and a dollop of natural yogurt. Even my husband enjoyed them and he doesn't usually like things with sultanas.

Should I admit that I was slightly disappointed there wasn't a little pile of sultanas left on his plate for me to eat?

Even so, he couldn't help himself from asking if I could make them with chocolate chips in next time!

How long do apple scones last?

These fruity scones are best eaten within a couple of days. However, you can gently warm them again in the oven to refresh them or pop them in the microwave for about 20 seconds. If you know you won't eat them all at once then freeze them in an airtight container for up to three months.

I usually defrost them at room temperature and then gently warm them through. Although you can pop them straight in the oven to defrost. Put the oven on a lowish temperature otherwise they will brown too much on the outside but still be frozen inside.

Can you adapt this scone recipe?

If you want to change this scone recipe then go ahead. You can switch the sultanas to another dried fruit. Try diced apricots or even dates.

You can also vary the spicing. I used cinnamon and it really is my favourite spice for scones but you could use mixed spice or ginger instead.

Why not try one of these scone recipes?

Or how about cheesy wild garlic scones? 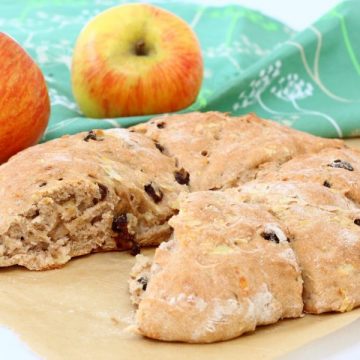