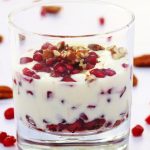 Christmas is  now coming to an end and the new year is about to start. So it's no surprise that I feel like I've been eating solidly for about a week while visiting various family members and in-laws. But, we're now finally back at home and I wanted to eat something that still felt a little Christmassy but that would also feel healthy. Luckily, I came up with this healthy yogurt dessert recipe, which looks much richer and more decadent than it really is.

Normally a fool is made of cream and sugar and is not at all healthy. This fool uses yogurt instead of cream and honey for sweetness. Don't worry though, it's not too sweet. It still has a tang from the yogurt and pomegranate. I have to say, if anyone made this for me, it would make me very happy. As it was, I made it myself, for me alone and enjoyed every last spoonful. Indeed, if I had made any more I would have found it quite a challenge to share it.

A dessert you can eat for breakfast!

When I first made this yogurt and pomegranate recipe back in 2010, I intended it to be a dessert. It does make a delicious healthy dessert but it doesn't just have to be that. It is also a brilliant breakfast recipe. You could even make it the night before and just grab a glass from the fridge to eat in the morning. If you're in a hurry, just dump all the ingredients in a bowl. Breakfast doesn't have to look pretty when it tastes this good!

What ingredients are in this yogurt and pomegrante recipe?

This is such a healthy yogurt bowl. It's basically natural Greek yogurt, pomegrante seeds, honey and pecan nuts. I'll let you decide whether to use fat free yogurt or not! You just put them all in a bowl and that's it!

Can you adapt this pomegranate yogurt fool?

Feel free to adapt the quantities to suit your tastes. You could also use a different sweetener instead of honey. Agave nectar would work well.

You could also use different nuts. Hazelnuts, pistachios or almonds would be good, as would a combination of seeds.

If you don't have any pomegranate seeds then why not use berries, cherries or grapes. You could even use dried fruits such as apricots or raisins.

Can you make this yogurt fool in advance?

This pomegranate yogurt recipe is perfect for preparing in advance. If you do intend it to be a healthy dessert then it can be stored in the fridge in pretty individual glasses. If it's a breakfast then you can make it the night before too!

That you could probably eat for breakfast or dessert! Why not try: 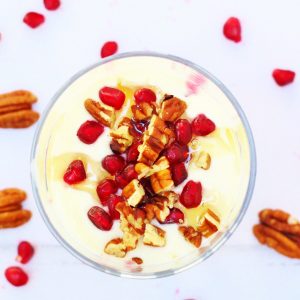 Do let me know if you make this yogurt and pomegranate recipe or any of my other recipes. I love to get feedback from readers.