If you haven't tried risotto made with potato then you're missing out! The smoky flavours of the smoked paprika and chorizo give this potato risotto a gorgeous Spanish flavour. It's easy to make and just as good as a traditional risotto made with rice. Delicious served with sea bass or any other white fish. 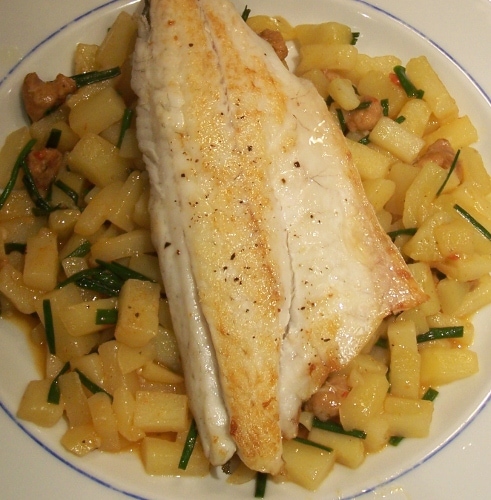 My favourite food programme is back on: Masterchef! Last year when watching it I started a series of posts called Inspired by Masterchef and so this year I'm hoping to do the same. Each week, after watching Masterchef, I will try to make something inspired by the show, to post by the end of the following week.

Each year it gets harder and the processes and ingredients used get more complex for just an ordinary home cook. So, I know that this is going to be a real challenge for me, especially as I have only just over a week to get the right ingredients and make each recipe.

Some of the recipes used on the show get posted on the BBC food website. But that would be just too easy. I want to be a bit more creative. Therefore, some of the recipes I post will attempt to recreate the recipe exactly, but based on my memory, whereas others will be a looser interpretation.

The inspiration for this chorizo potato risotto

Well now, on to my first recipe. I'd heard of potato risottos before and loved the idea of making a risotto with finely diced potato rather than rice. So of course, when one of the contestants decided to make a potato, chive, chorizo and orange risotto with sea bream, I liked the sound of it.

Well, except for the orange juice, and neither did John and Greg! Of course, for my recipe, out went the orange juice, and in came some lemon juice as a replacement! I'm sure it would have been much more popular among the Masterchef judges, if only the contestant hadn't tried to be so 'interesting'!

What kind of potatoes to use for potato risotto

It's important to use waxy rather than floury potatoes for this, as floury ones will disintegrate in the stock as they are in such small pieces. I know when you look at my picture, the pieces of potato don't look that small, but they did look small to me when I was chopping them up!

Would I change the recipe next time?

Maybe next time I will attempt a bit more refinement and dice the potato more finely. That's the only change I'll make. The chorizo and pimenton give the dish a lovely slightly smoky flavour and the taste really soaks into the pieces of potato. The lemon juice is very subtle and keeps the whole dish light.

Overall, I'm very pleased with my first dish of the series and looking forward to my next one. In fact, I'm so pleased I'm planning to cook this for guests, not just me and my husband!

If anyone else is as big a Masterchef fan as me and would like to join me in this challenge, let me know! 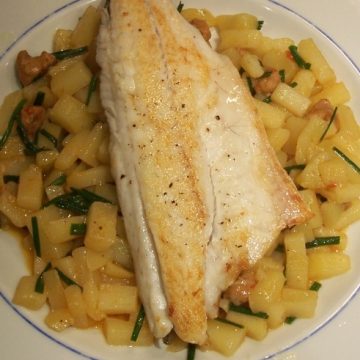 Corina Blum
If you haven't tried risotto made with potato then you're missing out!   The smoky flavours of the smoked paprika and chorizo give this potato risotto a gorgeous Spanish flavour.  It's easy to make and just as good as a traditional risotto made with rice.  Delicious served with sea bass or any other white fish.
5 from 1 vote
Print Recipe Pin Recipe
Prep Time 20 mins
Cook Time 20 mins
Total Time 40 mins
Course fish, Main Course
Cuisine International
Servings 2
Calories 449 kcal

Why not try my monkfish wrapped in pancetta? It's another recipe inspired by Masterchef. You might also like this baked sea bass with lemon and olives.

Do let me know if you make this chorizo and potato risotto. I love to get feedback from readers.