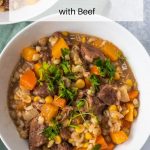 This tasty Scotch broth recipe with beef instead of lamb is definitely a winter comfort food dish! It's a thick hearty stew with beef, barley, split peas and root vegetables. The perfect recipe to warm you up on a cold day!

When I first made this scotch broth recipe, it was inspired by an episode of Masterchef. The contestants had been to Scotland to cook for the participants in the Highland games.

They were givena variety of Scottish produce they could choose to cook with. One of the groups chose to make Scottish Broth and that was my inspiration for this traditional Scottish dish.

What's in a Traditional Scotch Broth?

A truly authentic Scotch broth should use lamb on the bone rather than beef. Traditionally the lamb would be cooked on the bone in the broth and then removed and served as the main dish. The meat and bones would have added flavour to the broth as they cooked but the broth would be served separately.

As well as the meat, a Scotch broth contains grains, dried pulses and root vegetables. Pearl barley is usually used in scotch broth and it is perfect for it. If you haven't used pearl barley before, it adds a delicious chewy nuttiness.

Why not also check out my beef and barley vegetable stew? Or some of these Scottish recipes?

What ingredients do you need for this Scotch broth?

To make this Scotch broth recipe then you'll need:

Can you make this recipe with leftover roast meat?

If you have leftover roast lamb or beef then just put the vegetables, barley and split peas in a large saucepan. Cover with stock and simmer for 2 hours. Stir in the diced leftover meat at the end and just heat it through.

Can you adapt this Scotch Broth with Beef?

Of course you can adapt it. Scotch broth varies from household to household anyway. If you want to go down a more traditional route then use lamb instead of beef. For a vegetarian version just omit the meal altogether.

Add extra vegetables or vary them depending on what you want to use. Celery, parsnip and leeks all go very well. You can also stir in cabbage, kale or spinach near the end of the cooking time.

You can see from the picture that my broth is quite thick. If you prefer a thinner soup then just add more water as it is cooking. The liquid will evaporate a little too so it is always a good idea to check on it regularly and add an extra splash of stock or water to stop it from drying out.

Can you vary the quantities?

Scotch broth is a great recipe for batch cooking as it keeps well in the fridge or can be frozen. If you want to make a larger batch then just increase the quantities. I would say that for a recipe like this the quantities are very adaptable anyway - you don't need to stick strictly to the recipe.

Can you cook Scotch broth in the slow cooker?

Yes, this Scotch broth recipe is very easy to adapt to the slow cooker. There are details in the recipe card at the bottom of this page.

Basically you can cook the onions and brown the beef on the stove top and then transfer them to the slow cooker. Add all the other ingredients and cook on low for 8 hours.

What can you do with the leftover Scotch broth?

The leftovers can be kept in an airtight container in the fridge for up to three days. Just reheat thoroughly in a saucepan or in the microwave before eating.

Can you freeze leftover Scotch broth?

Yes, just pack them up in an airtight container and freeze for up to three months. Defrost thoroughly and then heat through thoroughly before serving.

Do have a look at my easy homemade soups recipe collection! If you like rib sticking winter stew recipes then take a look at one of these recipes: 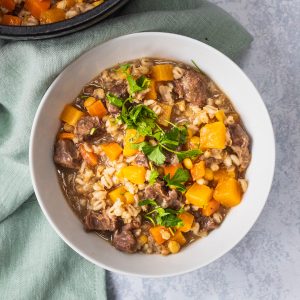 Corina Blum
This tasty Scotch broth recipe with beef instead of lamb is definitely a winter comfort food dish!  It's a thick hearty stew with beef, barley, split peas and root vegetables.  The perfect recipe to warm you up on a cold day!