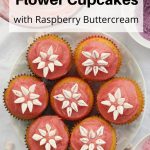 These pretty marshmallow flower cupcakes are a perfect recipe for spoiling those you love! Topped with raspberry jam buttercream. How about making for afternoon tea?

Little Miss Spice loves cupcakes and so most of the cupcakes I make have animal designs on or are aimed at children in some way. I don't get much chance to make more sophisticated ones. It's not that I don't want to, it's just that my little helper has other plans.

From pig cupcakes to marshmallow flowers

In fact, when I started out making these marshmallow flower cupcakes they were all going to be pigs! I had some mini marshmallows to use, but then I started to think about what else I could do with them.

A quick flick through Pinterest showed lots and lots of marshmallow flower designs. I began to think maybe I could get away with decorating some of the cupcakes with flowers. If I'd been a little more organised, maybe I could have added a hidden pink raspberry heart inside the cupcakes to make them a perfect Valentines treat.

How do you make the marshmallow flowers?

How do you make coloured sugar?

It keeps for quite a while in an airtight container so if you make more than you need, you can just save it for another day.

I have made quite a lot of cupcakes recently and so have been experimenting with slightly different recipes and oven temperatures. This cupcake recipe is my current favourite.

They bake perfectly. Plus, the cupcakes are very moist and have a lovely vanilla flavour.

The inspiration for the raspberry jam buttercream

Using jam to flavour the raspberry icing was an idea inspired by The More Than Occasional Baker. She used it on an incredible looking chocolate and raspberry layer cake. As soon as I saw it I knew I wanted to have a go at some similar icing.

Can you adapt these marshmallow flower cupcakes?

I used vanilla extract to make a traditional flavoured cupcake. However, you could use almond extract instead or even some lemon zest to make them citrus flavoured.

You can also adapt the buttercream by using a different jam, marmalade or curd instead of the raspberry jam.

Why not make a different design instead of flowers? For example you can use green sugar and arrange the marshmallows differently to make Christmas trees.

How long do these cupcakes last?

These cupcakes are best eaten within three days. Store them in an airtight container at room temperature.

Yes, you can freeze the cupcakes but it is best to freeze them without the buttercream and marshmallow flowers.

However, you can freeze the buttercream separately for up to three months too. Let it defrost at room temperature and rewhip it before using it.

If you've made the coloured sugar in advance then it's very easy to just snip the marshmallows in half and dip them in the sugar to make the flowers.

Cupcakes are always fun to make and my kids love them. If you'd like more recipe ideas then do check out one of these: 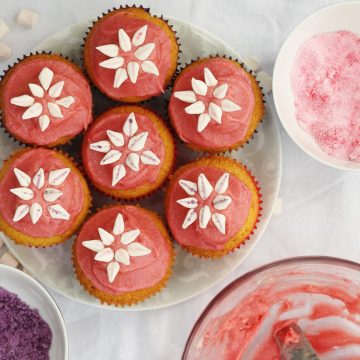 Bake of the Week hosted by Casa Costello