No kids' party is complete without cupcakes and these cute black and white animal cupcakes will definitely make everyone smile. Simple vanilla cupcakes topped with black and white ready to roll fondant. Easy to make but very effective! I'm so proud of these little black and white animal cupcakes. There's room for improvement certainly. Next time I would use a slightly larger cutter to cut the piece of fondant that covers the top of the cupcake. I would also knead the black fondant a little more before modeling the cat too, just to get a  smoother body. The packet of black fondant I used had already been opened so had gone a little hard around the edges, even though it was sealed in the packet.

I actually made 9 cupcakes but only managed to decorate three of them. Little Miss Spice was decorating the other ones and of course she kept trying to get her hands on the ones I had. When it came to eating them, as always she chose to eat the ones I'd decorated and I ate the ones she'd 'decorated'.

The Cupcake Recipe for these Cupcakes

The cupcake recipe was the from the Compendium of Cake Decorating Techniques by Carol Deacon. I used the quantities to make a small pound cake (15cm) but also added some vanilla extract. The cupcakes turned out to have a delicious quite strong vanilla flavour which I loved. It's definitely a recipe I'll use again for either a plain cake or cupcakes I plan to decorate. In fact, I've already used it again but flavoured with lemon.

The Inspiration for the Fondant Black Cat Cupcake

For the cat cupcake I took the idea from the Deacon book and just made a sausage shaped piece of fondant and then curled it around. I pulled some fondant out to make the ears, used a small knife to make the eyes and then made a long worm-like piece as a tail.

The Inspiration for the Sheep and Polar Bear Cupcakes

I was inspired to make the sheep by this one on Rose Bakes and the polar bear by this one on Polka Dot Bride. I just cut out pieces of fondant in the shapes I wanted and layered them up. 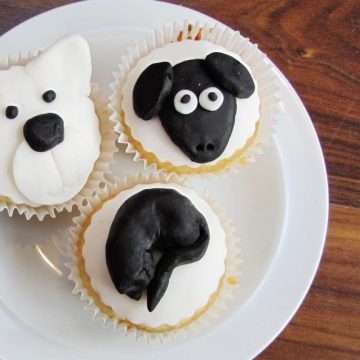 Ingredients for the Cupcakes

How to Make the Cupcakes

How to Decorate the Cupcakes

How to Make the Polar Bear

How to Make the Sheep Cupcake

How to Make the Cat Cupcake

Nutritional information is approximate and a guideline only.   Please note that for this recipe it does not include the calories in the fondant icing as I need to check what quantities were used.

Do check out my Marshmallow flower cupcakes! Or my Penguin Cupcakes!

As they contain eggs I am also linking them to Belleau Kitchen's new challenge, Simply Eggcellent.

Do let me know if you make these black and white animal cupcakes or any of my other recipes. I love to get feedback from readers.