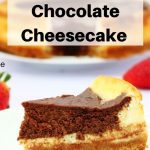 Could you turn down this baked chocolate cheesecake?

I love cheesecakes. Who doesn't? They are up there among my favourite desserts and I am almost unable to turn one down. Well actually, I can't turn down a delicious fruit or vanilla cheesecake, especially not if it has a traditional biscuit base and some berries with it.

If you know Dom of Belleau Kitchen's Random Recipe challenge then you'll understand what I'm talking about. This month he's teamed up with Caroline Makes and The More Than Occasional Baker for a fantastic joint challenge where Random Recipes meets Alphabakes.

as I felt it only fair to do some baking. I then randomly selected the 18th item in the 'a' section of the index. This turned out to be American Chocolate Ripple Cheesecake. It was something I knew straightaway would make my lovely husband happy, but wouldn't have been my first choice.

I set about making the cheesecake but as I read the instructions,  I became a little doubtful about the recipe. The list of ingredients said 1 egg but the recipe said to add the eggs one at a time.

I decided to do a little research online to check if other people had made the recipe and how many eggs they'd used. After all, I didn't want to ruin the whole cake. I soon discovered that the recipe should have had 2 eggs in it.

How I adapted the Cheesecake recipe

I also discovered that most people had put over twice as much sugar in - 225g rather than 100g as my Baking Bible was telling me. They described the cheesecake as very sweet and having a lot of sugar in it.

Now, I'm not an expert on cheesecake and how much sugar to add, but 100g of sugar to 700g of cream cheese didn't sound like very much, especially as it contained dark chocolate which wouldn't be so sweet anyway. I decided to settle on a nice round 200g of sugar in the end.

I also used more biscuits in the base and upped the butter too as quite a few people said there weren't enough biscuit crumbs to cover the base of the tin. In the end I was glad I had as I felt I only just had enough.

The moral of the story is, you can't always trust a bible, not even Mary Berry's Baking Bible. On the positive side however, the cheesecake did turn out exceptionally well.

My husband loved the chocolate digestive base and the chocolate cheesecake topping was just as I wanted it to be. It cracked on the top as it was cooling in the oven but aside from looks it was pretty near perfect.

You may notice there's not much of a ripple in my cheesecake. Well, I was worried I would lose the vanilla layer completely so I didn't attempt the rippling. Maybe next time. 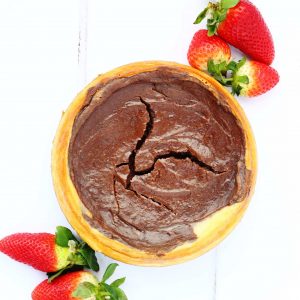 Ingredients for the Base

Why not try one of my other desert recipes? These are all great recipes to serve as dinner party desserts.

Pin this cheesecake for later!

Cook Once Eat Twice hosted by me, Corina, here at Searching for Spice