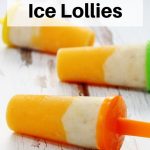 What could be more refreshing than these peach and banana ice lollipops on a hot day? These ice lollies are perfect for summer and a really popular frozen treat for kids. Easy to make and with no added sugar they're a healthy snack too!

We've had some hot days recently and there is nothing better on a hot day than sitting outside enjoying a homemade ice lollipop. I've actually had my lollipop mould for a few months but until now the most adventurous thing I've put in it has been orange juice.

It seemed however that both children were getting a bit bored of just one flavour of ice lolly. In fact, Little Miss Spice was beginning to prefer the bought ice pops to my simple homemade ice lollies. Something had to be done if I was going to be able to compete. It was time for me to become a bit more adventurous too.

Do you have to freeze the layers separately?

If you want the layers in the ice lollies to be really even you can add one flavour, freeze them and then add the next flavour. However as they are made with pureed fruit, the banana and yogurt layer should just sit on top of the peach layer anyway.

These fruit Ice lollies are less messy than bought ones!

Another advantage to making lollies with pureed fruit rather than juice is that they didn't seem to drip as much as the children were eating them. Fewer drips, less mess and less washing is definitely an advantage!

Can you adapt these peach banana ice lollies?

These homemade lollies  were definitely a success and now I've started making homemade ice lollies with pureed fruit I'll certainly be making more of them over the rest of the summer. As I said already, you don't have to make lollies with two layers. Any fruit that you can puree is a brilliant option. Strawberries, raspberries, mango and melon all work.

Why make your own ice lollies?

There are so many flavours of ice lollies available in the shops these days that you may wonder if it's worth making your own ones. After all, there are loads of healthy options too, not just the super sweet sugar packed ones.

The great thing about making your own ice lollies is that you can be creative with flavours. You can make whatever flavour you fancy and if you want your favourite smoothie in disguise as a lolly, it's possible!

Making homemade ice lollies is also a great activity to do with your children. Let your children choose what flavours they want to create and experiment with fruits they might not be so willing to eat normally.

Coconut milk is often a great ingredient to use and we also love these homemade coconut milk ice lollies with pineapple.

How long can you freeze them for?

It is best to eat these ice lollies up within three months although they will keep for a little longer.

How to take the lollies out of the moulds?

Just run the mould under the hot tap for 30 seconds and the ice lolly should come out easily. You can just put the rest back in the freezer.

These recipes are all a little healthier than ice cream and make delicious frozen snacks or desserts for summer.

You might also like my recipe collection for homemade frozen desserts and snacks. There are recipes for ice cream, sorbet, frozen yogurt and ice lollies! 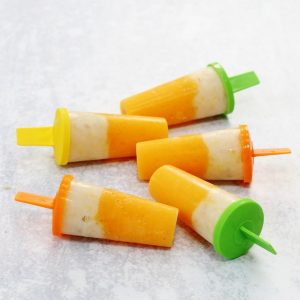 Corina Blum
What could be more refreshing than these peach and banana ice lollipops on a hot day? These ice lollies are perfect for summer and a really popular frozen treat for kids.   Easy to make and with no added sugar they're a healthy snack too!
5 from 1 vote
Print Recipe Pin Recipe
Prep Time 10 mins
Freezing time 6 hrs
Total Time 10 mins
Course Dessert, Snack
Cuisine International
Servings 6
Calories 41 kcal

Nutritional information is approximate and a  guideline only. 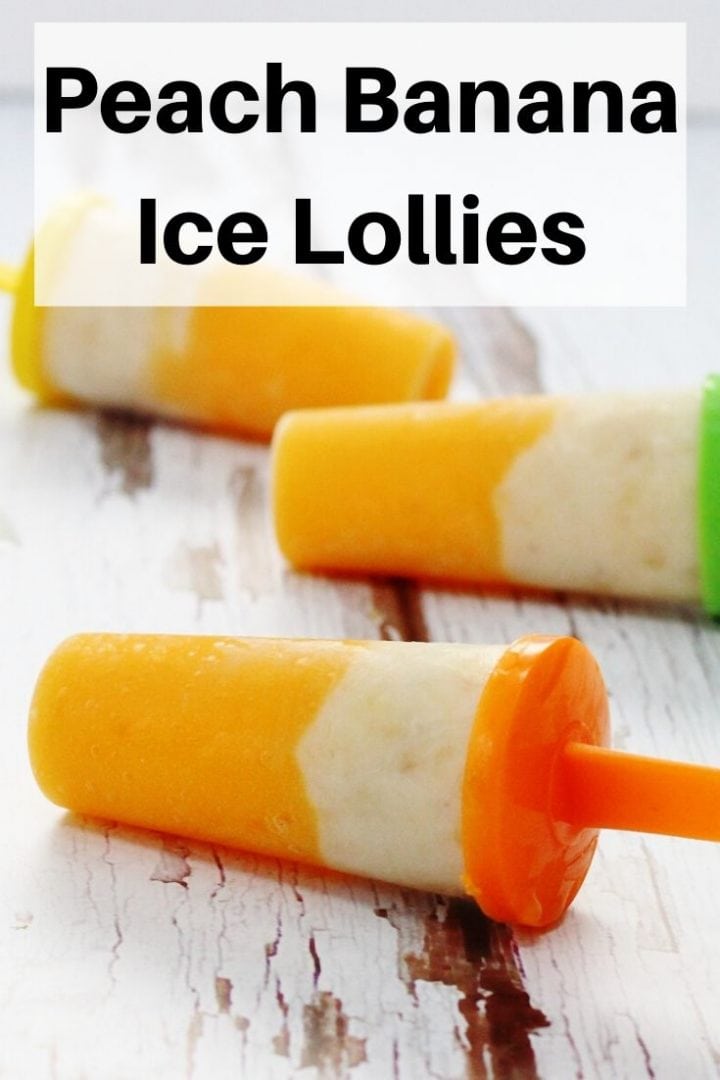