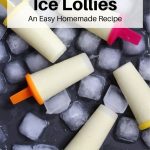 These fruity homemade coconut milk ice lollies are so refreshing right now. With just 3 ingredients including pineapple and coconut milk they make a healthy alternative to shop-bought lollies.

This summer we have discovered some delicious fruity coconut milk lollies in our local supermarket. In fact, the children love them so much that I decided it was time I made a different flavour at home. Naturally, with it being so hot recently I chose to go for something tropical and these simple lollies are just coconut milk, fresh pineapple and agave nectar blended together.

In fact, if you can't wait to freeze them into ice lollies, you can just drink the mixture as a smoothie. I didn't have enough moulds so that's just what I had to do. It's a hard life sometimes!

Not surprisingly, Master Spice, who loves coconut milk absolutely adores these lollies and I'll be making them a lot for him this summer. The great thing about homemade lollies is that you know exactly what is in them. There are no hidden nasties. They're also a great way of getting your children (or other half!) to eat more fruit.

I think these pineapple ice lollies are great for children and I'm quite happy to eat them too. However, if you are thinking of making a more grown up flavour then a splash of rum could turn these into piña colada lollies. I haven't tried that yet but when I do I'll let you know! If you try it first then please let me know as well!

How could you adapt these homemade coconut milk ice lollies?

I blended all of the fruit but you could blend some fruit then add chunks of unblended fruit to the lolly moulds before pouring in the blended mixture.

These homemade coconut milk ice lollies are vegan but there's no reason not to replace it with cows milk if that's what your family like. You could also replace the agave nectar with honey or maple syrup if that's what you have at home. You could even make a simple sugar syrup with caster sugar and water to add some extra sweetness.

The amount of agave nectar can also be adjusted. I would go with what your family will enjoy. If you don't add any sweetness they may refuse to eat them but you also want them to be a healthy alternative to bought lollies. The amount I added to these ice lollies meant they were not particularly sweet and some people may prefer a sweeter ice lolly.

How long can you freeze homemade ice lollies for?

You can keep these for quite a long time in the freezer. However, they are at their best if you eat them within three months.

Although these are not all vegan, they all make relatively healthy frozen desserts or snacks. 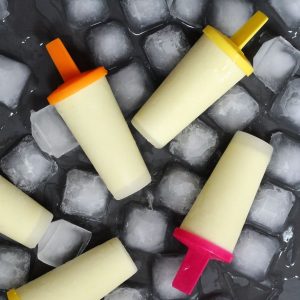