These spiced chickpea tacos with with roasted vegetables make a healthy nutritious meal for lunch or dinner. Serve without the yogurt and they're vegan too!

Until recently I always thought of tacos as being the crunchy Tex Mex type. I like them but they can be messy and difficult to eat. The hard shell always seems to crack in the wrong places leaving you with the filling sliding down your fingers. Not the type of meal to eat if you're precious about getting messy!

However, tacos don't have to be crunchy. Soft tacos are simply wheat or corn tortillas wrapped around a filling. So much easier to eat! And over the last few years, eating food in wraps has grown in popularity in the UK.

So, when this month's Recipe Redux theme of Taco Tuesday was announced, I decided straightaway that I would go for soft tacos. I decided to avoid traditional Mexican flavours but to go for a more Indian inspired chickpea taco.

These Indian inspired tacos are so easy to make!

The spiced roasted chickpeas are really simple to make but so moreish! Just mix together some spices and some oil then toss the chickpeas in the spicy oil. I then roasted them in the oven along with aubergines, butternut squash and red peppers. Tacos need sauce too so I chopped some fresh coriander leaf and stirred it into natural yoghurt.

The roasted chickpeas are good enough to snack on just by themselves but are also delicious with the sweet roasted vegetables. It makes a tasty vegetarian meal but could also be vegan if you used vegan yoghurt. Alternatively you could replace the yoghurt with houmous, baba ganoush or this carrot dip for a yummy vegan choice.

My children love filling their own chickpea tacos!

If you have children it can be fun to prepare tacos like this at home. Just put everything down on the table and everyone can make their own taco with their favourite fillings. The only problem is when one child wants all the chickpeas for themselves! 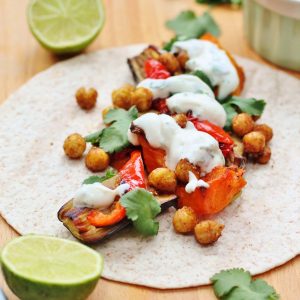 To make this recipe vegan then use vegan yoghurt or replace the yoghurt with houmous or baba ganoush. Nutritional information is approximate and a guideline only.