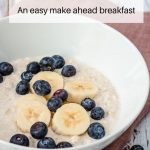 Easy recipe for traditional bircher muesli made with oats, milk, apple juice and yogurt. It's flavoured with apple and cinnamon then topped with fresh fruit.

For years I'd avoided bircher muesli. Why anyone would want to mix juice, milk and oats was beyond me. I don't like milk and the only thing worse than milk would be the idea of juice and milk together.

As a child I would eat an orange for breakfast and then wash out my bowl before getting my cereal. I couldn't stand even the slightest trace of acidity ruining my breakfast!

I'll admit that my breakfasts are pretty boring normally. I love breakfast but I'm  happy to just eat toast, porridge or muesli. Ordinary muesli with just a splash of milk to stop it from being uncomfortably dry.

But then I was challenged to make an interesting healthy breakfast and the idea of bircher muesli just kept popping into my mind. I wasn't sure why. I didn't think I'd like it.

I expected to HATE bircher muesli!

I considered making overnight oats without juice and warming them up the next day so I could feel I was still eating porridge. But in the end I decided to face my fears and have a go at a more traditional bircher muesli.

After all, if it was as unpleasant as I suspected, I could simply make toast. No one would be any the wiser. And maybe I could l persuade my children to eat it.

When I first made this bircher muesli was new to me so I slightly adapted a recipe from My Little Gourmet.

What ingredients do you need in bircher muesli?

How do you make bircher muesli?

The evening before you just need to mix together the oats, apple juice, lemon juice and milk. Put them in the fridge till the next day.

The next morning grate an apple and add yogurt, honey and cinnamon. Top it with sliced banana and blueberries.

What is the apple juice like with the milk?

As I said earlier, when I first made bircher muesli I seriously did not expect to like it. I thought the apple juice would be wierd with the milk but actually it was fairly subtle and the flavours worked so well together.

Since that first time, I've made this recipe a lot!

How can you adapt bircher muesli?

There are lots of ways you can adapt this basic recipe. Why not switch the apple juice to a different fruit juice? Orange and cranberry juices are both delicious in this.

If you want it to be sweeter add a little more honey. I only used a teaspoon as I don't like really sweet breakfasts so make sure you taste it and add more if you need to.

Instead of adding cinnamon you can add vanilla. You can also experiment with different flavoured yogurts.

Can you make vegan bircher muesli?

Yes, just substitute the milk for a plant-based milk, the yogurt for vegan yogurt and the honey for maple syrup or agave nectar.

How long does it keep in the fridge?

You should be able to keep it in the fridge for at least 3 days as long as the milk is fresh when you mix it up. I have even heard of storing it for up to 5 days. Make sure you store it in an airtight container.

Are overnight oats and bircher muesli the same thing?

They can be the same thing. Bircher muesli is the Swiss way of making overnight oats and traditionally it contains juice and fruit, usually apple, as well as milk.
Overnight oats is just a more general term and would also include for example a version made with peanut butter and maple syrup but no fruit.

Can you serve bircher muesli warm?

Traditionally bircher muesli is served cold straight from the fridge but there is no reason why you can't heat it up if you prefer warm oats.
Just put it in the microwave for a minute or heat it gently in a small saucepan.

What are the origins of bircher muesli?

Bircher muesli was invented over a hundred years ago by a Swiss doctor named Maximilian Bircher-Benner. Hence the name bircher muesli.
He invented it not as a breakfast dish but as an appetiser in the hope that it would get his patients to eat more fruit and vegetables!

If you're looking for more breakfast inspiration then why not check out one of these recipes:

After step 2 the muesli can be kept for another day in the fridge if you are just making it for one person. Nutritional information is approximate and a guideline only.