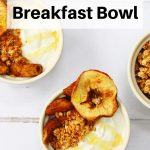 If you're looking for healthy quark recipes then how about this apple and cinnamon quark breakfast bowl? It's easy to make, low in fat and makes a delicious start to the day.

Why you should give quark recipes a try!

Apples and cinnamon are a brilliant combination. I love them in baking and desserts so why not in a breakfast recipe? This quark breakfast bowl contains some of my favourite flavours and is a super healthy choice too. Because quark is low in fat but high in protein it will help keep you feeling full of longer too. So, if you're looking for a satisfying healthy breakfast then why not try it?

What's in this quark breakfast recipe?

This breakfast bowl is a combination of plain quark, granola, lightly stewed cinnamon apple slices and a drizzle of honey.

If the apple slices are already cooked and stored in the fridge then it's very quick to put this bowl together in the morning.

Can you adapt this quark breakfast bowl?

This quark breakfast recipe is easy to adapt. Instead of using apples then any cooled stewed fruit can be used. You can also use fresh berries instead. Why not just combine your favourite fruit with quark?

I added a little honey to sweeten the quark a little but you can leave it plain. Alternatively you can use a flavoured quark instead which will be sweeter although higher in sugar.

I used homemade coconut granola but you can use bought granola or muesli instead. Or any healthy breakfast cereal.

I topped the breakfast bowl with apple crisps made in the air fryer. They are quick and simple to make but you don't need them for this recipe. If you do make them, then serve them on the side. Unfortunately they go a bit soggy if they are touching the quark for too long before you eat them!

When did I discover quark?

Many years ago I spent a year in Germany working as an English assistant in a secondary school. I had a fantastic time and one of the things I discovered while I was there was quark.

I hadn't heard of it before I went and I didn't even know what to call it in English or if it had an English translation. While I was in Germany I didn't try many different quark recipes but I did develop a love of fruity quark breakfast bowls.

I often started the day with quark, fresh fruit and muesli all mixed together. Sometimes I left the quark plain and sometimes I swirled in some honey or jam as well.

Well, after I returned to the UK I forgot about quark. I didn't see it in the supermarket and it wasn't long before I didn't even think about it.

Where can you buy quark?

Well, you might not have been able to get quark back then but now you can. I've discovered not only plain quark but vanilla quark and garlic and herb quark just in my local supermarket.

Not only have I been able to create this delicious apple cinnamon breakfast bowl but I'm looking forward to trying so many more quark recipes as well.

Yes, so healthy that it is considered to be a German superfood. It's low in fat and salt and high in protein. It can be used as a replacement for less healthy foods such as cream cheese or sour cream. It contains more protein and less fat which is great for anyone trying to eat a healthy diet.

Does quark taste the same as yogurt?

Yogurt has a sour tang that is missing from quark. Now, I love that sour yogurt tang but I know some people hate it and dislike yogurt. Quark has a much milder taste and is creamy too. If you don't like yogurt, you might like quark.

Why not replace the yogurt in a smoothie with quark? Add it to mashed potato instead of butter? Or to soup instead of sour cream? Apparently, it's also great in baking. I have to admit that I haven't tried baking with it yet but I am definitely going to have a go at some recipes soon.

Do take a look at my mango cheesecake with quark recipe. You could easily adapt some of my other recipes such as this pomegranate yogurt fool, this Nutella banana and avocado smoothie bowl or this banana, avocado and Nutella smoothie.

If you're just looking for breakfast ideas then how about this bircher muesli? Or this apple and cinnamon smoothie? 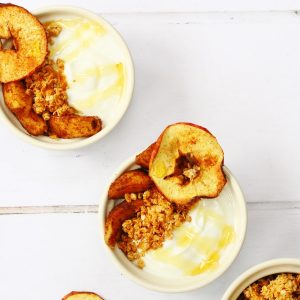 Nutritional information is approximate and a guideline only. I normally make the stewed apples in advance and keep them in the fridge for when I want to make this recipe.   It then takes just a couple of minutes to prepare.

Cook Once Eat Twice here at Searching for Spice