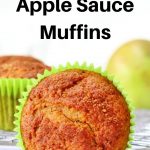 These cinnamon applesauce muffins are deliciously moist and perfect for using up a glut of apples. Why not make them as an after school snack or even gobble one up for breakfast?

One of my favourite flavour combinations at this time of year has to be apple and cinnamon. I love it in crumbles, pies, cakes and especially now in these cinnamon applesauce muffins. If  you're looking for an easy seasonal muffin recipe then these are for you!

The apples are from a friend's house. Imagine my delight when she complained about the apple tree in her garden and the fact that they didn't eat apples.

Oh yes, I came home with a huge bag of apples and this is the first recipe I made with them.

Do applesauce muffins taste of apple?

I have to admit that the muffins don't have a huge amount of apple flavour. You might even think they are just spiced muffins if I hadn't told you.

If you want to make them really taste of apple then you can add some diced fresh apple to the mixture. Or why not put some sliced apple on the top as I did in this date and apple cake?

I didn't do that this time as my children have turned a little picky as far as fresh fruit inside cakes go. I worried that they wouldn't eat these if I did that! Please, don't let that stop you.

The muffins may not have a huge hit of apple flavour but whenever I can hide a few extra fruits or veggies in my bakes then I'm happy.

How can you adapt these apple sauce muffins?

As I mentioned above, you could add a little fresh diced apple to the muffin batter. You could also add a few raisins to make the muffins even fruitier.

If you want to adapt the spicing then mixed spice or ginger would both work well as alternatives.

Can you freeze these spiced apple sauce muffins?

These apple sauce muffins freeze really well for up to three months. Put them in an airtight bag in the freezer. Bring them out a couple of hours before you want to eat them.

You can keep the muffins in an airtight container for at least 3-4 days. However, they don't last long at all in our house. They are usually all gone in about 2 days. Even so, they are a great recipe to make as an after school snack. 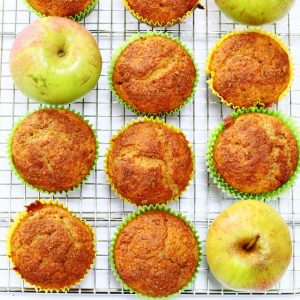 Add a little diced apple for more of an apple flavour. To make your own applesauce for this recipe, peel, core and dice 4 apples.   Add a dash of water and bring to the boil.   Simmer until the apples are soft.    It should take 5-10 minutes.   If the pan gets dry then add a little more water.   When the apples are ready, drain off any excess water and blend with a stick blender. Nutritional information is approximate and a guideline only.

If you like these cinnamon applesauce muffins, try one of these muffin recipes!

These fruity muffins all make a slightly healthier choice!

Cook Once Eat Twice hosted by me, Corina at Searching for Spice
Simple and in Season hosted by Katie at Feeding Boys
Bake of the Week hosted by Casa Costello