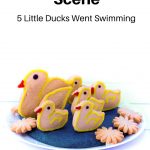 Brilliant for kids parties or christenings, these easy 3d biscuits are achievable even for novice bakers. The duck biscuits are based on the theme of 5 Little Ducks went Swimming One Day and are simple to make as well as super cute!

I first made this simple 3d duck biscuit scene four years ago after watching the Great British Bake Off. At the time, my 2 year old daughter was obsessed by ducks and I knew she would love it. After all, her favourite nursery rhyme was 5 Little Ducks Went Swimming One Day. If I was going to make a 3d biscuit creation it would have to be ducks.

Four years later and I had the chance to sit at one of the bakers' tables at the Extra Slice recording. I could take some biscuits with me but what to take? Well, Little Miss Spice is 6 now and not quite so obessessed with ducks, although they are still her favourite animal. I couldn't resist remaking them for her. After all, these easy 3d biscuits are great for kids of any age.

There were some impressive creations at the Extra Slice recording. My little duck biscuits did not quite stand out enough to be featured on the show but I'm proud of them anyway.

How To Make Easy 3d Biscuits?

Typically gingerbread is used to make 3d biscuit designs but for this construction shortbread works just as well. As it's not a tall biscuit creation and  you are not stacking lots of biscuits on top of each other, it doesn't have to be a really strong biscuit.

Don't make it too thin though, you need to be able to stand the ducks up so thicker biscuits work better. Shortbread is also one of our favourites!

What to do if you don't have the right biscuit cutter

If you are lucky enough to have a duck-shaped biscuit cutter then that's great. If you don't then make a paper template for the ducks before you start. The 5 little ducks need to be the same size and the template will make things a lot easier.

Make sure each template is flat on the bottom so the ducks will be able to stand up. Then just use a knife to cut around the template.

What food colouring to use so the biscuits keep their colour

To make the pond blue, you need to add a little food colouring to some of the biscuit dough before baking. Some food colourings fade a lot in the oven and it's hard to get the depth of colour you want so I recommend using professional grade food colouring.

For the pond in these recipe I used ProGel baby blue concentrated food colour. You only need a little bit to get a very strong colour into the dough and it didn't fade in the oven.

I have made this 3d biscuit scene a couple of times and experimented with making tiny wings for the little ducks. However, as they are much smaller than the ducks they do bake much more quickly.

So, if you choose to make wings out of biscuit dough, then put them on a separate baking tray and take them out of the oven before the larger pieces of shortbread. Otherwise they will burn!

Instead of making wings I like to just draw little wings using yellow designer or writing icing.

If you have children then this a great activity to do with them. I make a lot of dough so that both kids can be kept busy making their own biscuit creations while I'm focusing on cutting out the ducks!

When I first made these easy 3d biscuits my daughter helped me make the biscuits but I iced them and stood them up on the pond while she was in bed. She had a lovely surprise in the morning but it did mean we had to have biscuits for breakfast that day!

How could you adapt these 3d biscuits?

This 3d duck pond scene is great for little children but it can so easily be adapted to suit your child's tastes.

Instead of making duck, why not make a 3d biscuit sculpture of fish-shaped biscuits and imagine that it's an underwater scene? If you're really ambitious and you have a fish tank at home, could you recreate it in biscuit form? Ok, we have a fish tank so this is actually something I'm thinking of trying!

The large biscuit that is used as  base doesn't have to be blue. Make it green and it could be a field or garden. You could top it with 3d animal biscuits to make a farm or zoo scene.

What about if your kids are not quite so into animals? How about making cars or trucks instead?

I almost always add vanilla extract when I'm making biscuits as I love the flavour but you could use almond, lemon (plus zest) or strawberry. In fact, any flavouring that you want and that whoever eating them likes!

How long do these biscuits stay fresh?

Shortbread biscuits will stay fresh for at least 4 weeks in an airtight container. So why not make a big batch and then keep them to snack on?

Yes, although if they are in duck shapes they may get freezer burn as it's hard to keep air away from them. I wouldn't freeze them for more than a month.

You can also freeze the dough. It's possible to bake shortbread directly from frozen or you can defrost it and then use it as if it were freshly made cookie dough. 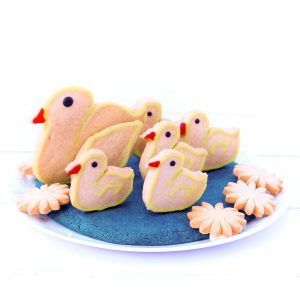 Extra Ingredients Required if Making a Pond and Decorating the Biscuits