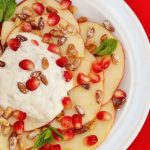 This apple carpaccio is a great choice if you're looking for a lighter Christmas dessert. Fruity and refreshing, it looks attractive too! It also makes a great fruity breakfast.

This beautiful raw apple carpaccio is certainly a healthy dessert choice. When I think of apple desserts, I normally think of pies, sponge puddings and crumbles. I don't very often make desserts with raw apple. I have to say, I normally prefer cooked apple. However, with the pomegranate seeds, crunchy sweet pine nuts and the yogurt, I was completely taken with this fruity carpaccio!

The inspiration for this apple carpaccio

and as with lots of Jamie recipes, it's simple, tasty and looks great too. Pomegranate seeds are so Christmassy, as are the candied pine nuts, although I think hazelnuts would be a lovely alternative.

Did I say candied pine nuts? Yes, I love nuts and do occasionally make candied or honey roast nuts but I'd never thought to make candied pine nuts before. In fact, I normally think of pine nuts as being an ingredient for savoury recipes not for desserts. That is definitely something that's going to change from now on, especially as they go so well with the raw apple in this dessert.

However,  it is very difficult to get the candied pine nuts right. They go from being not cooked at all to burning in a matter of seconds. Or at least that's how it seemed to me. Whatever you do, don't get distracted while they are in the oven!

How do you get really thin apple slices?

I used a spiralizer

with a ribbon blade to slice the apple for the carpaccio. I then broke the spirals up so they appear to be in slices rather than ribbons. You could use a mandolin or even just a knife to finely slice the apple or even dice it then serve it in layers in a glass.

When to serve this apple carpaccio

This thinly sliced apple recipe is great as a healthy dinner party dessert option. No one wants to spend all their time in the kitchen when they've got guests and with this apple carpaccio, as long as all the components are prepared in advance, it's very quick to assemble. What more could you ask from an easy healthy dessert that tastes delicious too?

Can you adapt this apple carpaccio?

You could change this dessert a little to suit your tastes. If you don't fancy apple then why not swap it for pear, or even pineapple?

The pomegranate seeds are delicious and perfect for Christmas but you could use berries instead.

As I mentioned earlier, if you don't have pine nuts then you could use a different kind of nut or seed instead.

You could also use lemons, limes or oranges instead of the clementines.

Can you make this apple carpaccio a bit more decadent?

So, what if you're saying but it's Christmas and I want to indulge a little? Well, if you do have a little whipped cream or even vanilla ice cream then you could swap that for the yogurt! I won't tell anyone. But, I will say that this healthy dessert is delicious with yogurt and that is definitely my choice!

If you like this fruity recipe then do check out one of my other recipes that uses fruit: 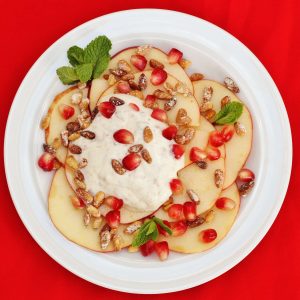