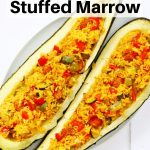 Have you ever wondered how to cook a marrow? Well this stuffed marrow recipe with Spanish rice is simple, delicious and a great way to use up any overgrown zucchinis or courgettes!

I don't think I'd ever eaten a marrow before I was at least 30. It's one of those vegetables that everyone has heard of but you just don't see for sale anywhere. Well, at least not in supermarkets these days.

I imagine it was different in the past. Marrows were probably one of those vegetables people lived off. Also, why pick them as courgettes when you could wait a couple of weeks and have 6 times the amount of food?

Nowadays flavour is everything. Maybe that's why they have somehow fallen out of favour in recent years. Marrows are not so tasty as courgettes but they are definitely bigger.

Marrow are perfect for stuffing!

So now you're wondering why I'm giving you a recipe for a bland vegetable? The brilliant thing about marrows, also known as overgrown zucchinis or courgettes, is that they take on flavours so well. The smokey Spanish flavours in the rice stuffing sink into the marrow and it becomes just as tasty as the filling.

Why buy a marrow?

The only reason I ended up with a marrow a few years ago was that I was looking for courgettes to pick at Garsons pick-your-own but everyone else had got there first. There were almost no courgettes but quite a lot of marrows.

It seems that even when you can pick them yourself they suffer in the popularity stakes. I decided I should get one to try. Even so, I have to admit to keeping it in the fridge for almost a week before I could decide what to do with it.

I was thinking of doing some kind of spicy minced beef and rice stuffing but then I forgot to buy the mince when I was shopping. So, I looked in my cupboard for inspiration and came across a couple of almost empty packets or rice. I also had a half-used ring of chorizo sausage in the fridge and that's how this turned into a more Spanish flavoured dish.

What does this Spanish rice stuffed marrow taste like?

I was expecting to like the stuffing but I wasn't sure if I'd like the marrow. I expected it to be a bit watery and bland. Well, it wasn't watery and it absorbed the flavours of the rice so it became really really tasty. I loved it. As I ate this for the first time I realised that marrow  would make a perfect base for any strong flavoured stuffing.

I thought I'd be eating up the marrow for days as my husband doesn't like courgettes or squashes. Well, it might not have been his favourite dish ever but he was quite happy to eat it for two days in a row.

Since then I have most definitely become a marrow convert. I now pick marrows every year and have remade this dish a few times as well as created a few more tasty stuffed marrow recipes!

Do try one of these stuffed vegetables recipes if you love this style of cooking. I realise some of these pictures need to be updated and I promise you they are more delicious than they look!

Why not try my chicken and chorizo paella recipe too? 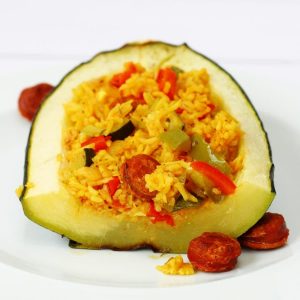 Do let me know if you try this stuffed marrow recipe. I love to get feedback from readers.