These Christmas Cake Pops contain all the elements of a traditional Christmas cake but with a modern presentation and the addition of chocolate!

These Christmas Cake Pops have a Secret Centre!

What I love most about Christmas cake is the marzipan. Of course I love the cake but the marzipan has to be my favourite bit. Don't you agree? So, one of the best things about these Christmas cake pops is the ball of marzipan in the centre. It's the last bit of the cake pop you eat and don't we all save the best till last?

Where's the icing on these Xmas Cake Pops?

You may be reading this and wondering where the icing is. After all, Christmas cakes are normally covered in a layer of white icing. Well, when I eat Christmas cake I often peel a lot of the icing off and just eat the cake and the marzipan.

You may disagree but I'd say the icing is there to look good and the marzipan is there to taste good. With that in mind I've left just a little icing in the form of a few festive sprinkles.

I know chocolate is not traditional in a Christmas cake but no one could complain about chocolate could they? I've coated the cake pops with a layer of dark chocolate. I normally prefer milk chocolate but for these cake pops it has to be dark. The brandy along with the sweetness and richness of the fruit in the cake goes so well with a bit of dark chocolate.

Can you replace the alcohol in these cake pops?

If you're making these for children  you could leave the alcohol out or use a little orange juice instead. I rarely cook with alcohol but I felt these cake pops needed it. I have used cider in my Christmas cake for the last two years but for these Christmas Cake Pops I've gone traditional.

Can you use a bought Christmas cake for these Cake Pops?

If you are making your own Christmas cake, it makes sense to double the quantities and make two cakes so you can use one for this recipe. However, I know that not everyone has time to make their own cake and you certainly shouldn't feel pressurised to. There is absolutely no reason whatsoever why you shouldn't take the easy route and buy a Christmas cake just to make these Christmas cake pops.

The recipe below is enough to make two cakes. I've gone both modern and traditional. One of the cakes is wrapped up and waiting for Christmas. I'll be feeding it liberally with more brandy over the coming weeks. It will definitely be coated with a generous layer of marzipan, although now I've tasted these cake pops I may do away with the white icing altogether and have a chocolate coated Christmas cake instead.

Of course, if you don't want  a traditional cake at all simply use both cakes for the Christmas cake pops, just double the amount of marzipan and chocolate. And if you're feeling inspired but don't feel this is quite the right recipe for you, then do take a look at Waitrose's Christmas Puddings with a Twist  page for more seasonal inspiration.

How long do these Christmas Cake Pops Keep?

These Christmas cake pops keep for quite a long time. Just like the actual Christmas cake which is often still good to eat for a month or two, the cake pops are the same. I would advise aiming to eat them within a month though. It's not difficult to! Just keep them in an airtight container. 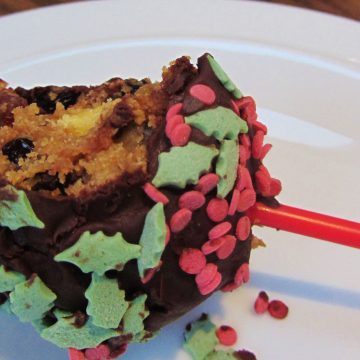 For the Christmas Cake

For the Cake Pops

If you're short of time you could replace the homemade Christmas Cake with a ready-made one.
Tried this recipe?Tag me on Instagram @Searchingforspice

How about one of these festive Christmas recipes?