This easy mince pie recipe really will convince you there's no need to buy mince pies again! They're made with a simple shortbread pie crust that makes them deliciously buttery and crumbly. They're simple, tasty and your kids can help make them too! Perfect for some Christmas baking.

So, it's only November but I am already posting my second Christmas recipe. Until trying these I would have said I wasn't really that keen on mince pies. I would eat a few every Christmas but I wouldn't look forward to them and I wouldn't miss them if they weren't there. I wouldn't buy them and until now, I wouldn't have made them either.

Mince pies are a great recipe to make with kids!

So, what's changed? Well, Little Miss Spice loves play dough and she loves to make star shapes with it. As I hadn't done any baking with her, I decided that letting her cut out the tops of the mince pies would be the perfect way to introduce her to some real baking.

Now, if you're going to get a one year old to help with baking then you need an easy recipe! I promise you, these mince pies are not just easy, they are possibly the tastiest ever mince pie recipe!

The mince pie pastry is like a shortbread biscuit!

The shortbread dough is very forgiving and can be thrown around a lot and still makes great biscuity pastry case. That's what you want, isn't it? Some bought mince pies can be a bit like cardboard but these are so delightfully crumbly. They're like shortbread.

Admittedly, maybe a less shortbready dough would have been easier. The dough takes a lot of work to actually come together and form a dough. When I first made these I didn't think it wasn't going to work as it kept just crumbling apart but eventually it did and it was definitely worth it.

The pastry is sweet and buttery and tastes like shortbread. I even made little biscuits with the leftover dough and they were lovely eaten just as they were.

This mince pie recipe is easy but you do need a little patience. What makes it a really fuss free pastry recipe is that you can just press the dough into the muffin tin so don't worry too much if it keeps crumbling up.

I promise you, these shortbread mince pies are incredibly delicious. So delicious that I will be making a few more batches and putting them in the freezer for over Christmas, which means there's still no need to go out and buy any mince pies.

If you wanted these to look a little bit more special for guests you could dust them with icing sugar. However, I don't always bother. I think they are perfect just like this. They are sweet and rich with crumbly buttery pastry.

Sometimes though, if I want a real treat on Christmas day evening, I enjoy one topped with leftover rum sauce!

Can you adapt this mince pie recipe?

Of course you can! What if it's not Christmas or you don't like mince meat? Go ahead and add a different filling. They're delicious with stewed fruit too

What about if you're really struggling with that crumbly pastry? Why not just crumble it onto the top of the mince meat and you'll have crumble topped mince pies?

Make them look a bit prettier by dusting with icing sugar. Or brush them with egg and scatter on some flaked almonds before baking.

I don't think they need chocolate but I have even seen mince pies drizzled with chocolate! Be creative if you want. Go on have fun with some Christmas baking!

How long can you keep these shortbread mince pies?

These easy mince pies will keep for about a week in an airtight container. If you want them to last longer then freeze some of them. They'll freeze for up to three months. Just defrost at room temperature before eating .

I love experimenting in the kitchen at this time of year. I've discovered that my children love spicy biscuits and cookies so I've made lebkuchen, gingerbread biscuits and buttery chocolate chip biscuits for them.

We also love puff pastry and these almond rolls are always a hit too! 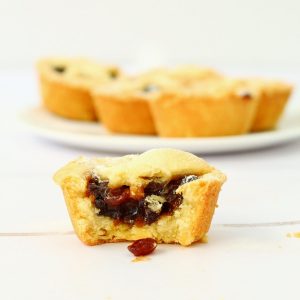 Cook Once Eat Twice hosted by me, Corina, here at Searching for Spice

Baking Crumbs hosted by Jenny at Apply to Face

This post was originally published in 2013 but has been updated and republished.