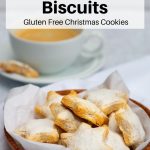 Have you tried cinnamon star biscuits? These German cookies are a classic at Christmas time but I think they're delicious at any time of year. With a soft chewy texture they are the perfect accompaniment to a hot drink. They're also gluten free!

What do you do if you have just one leftover egg white?

I would definitely recommend making these spiced German cookies. If you like soft but chewy textures and nutty flavours you will love these.

Yes, I can't get enough of them and they are perfect for Christmas. But even if it's the middle of June and you have a leftover egg white there's no reason not to make them!

My inspiration for these cinnamon biscuits

Well, it was partly that egg white and partly the fact that I love making biscuits and wanted to try something different. I make biscuits almost every week so I do need to experiment a bit!

I was also inspired by the recipe for them in one of my favourite baking books, Step by Step Baking. However, I have changed the quantities as the original recipe called for two egg whites to make a larger batch.

What's the texture of these cinnamon star biscuits?

Don't expect these cinnamon stars to be light and crisp. They're better than that! These tasty German cookies are deliciously chewy and almondy in the middle. Just perfect for someone who loves almonds.

These cinnamon star biscuits are classic German Christmas cookies. They have all the flavours of Christmas - packed with cinnamon and almonds. They are also ideal for gifting. Who doesn't like getting homemade biscuits at Christmas time?

If you store these biscuits in a dry container they should keep well for up to 2 weeks.

If you don't want to eat them all immediately you can freeze the dough for up to a month. Defrost completely and then bake them. You can also freeze the icing to use later as well. Just add a drop of milk if it seems too thick. 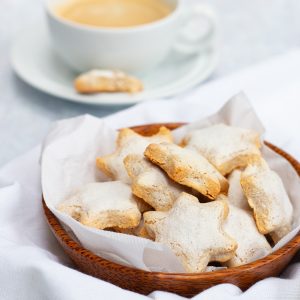