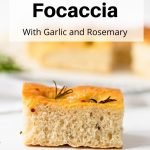 This garlic and rosemary breadmaker focaccia recipe with the dough made in the bread maker is such a simple bread recipe. It's easy to make and with very little hands on time. It's so good for a tasty family meal.

There is something so comforting about homemade bread that few other homemade recipes can match. That fresh bread smell as it comes out of the oven is amazing! Of course, this focaccia has garlic and rosemary in which makes it smell even better!

I love the fact that I can experiment with my own flavours when I make bread myself. The only limits are imagination!

Breadmakers are brilliant for making dough

I've had a bread maker for a long time and it's one of my favourite kitchen gadgets. When I first got it I used it constantly to make my everyday bread. It has lots of settings and it can do lots of fancy things if I want.

However, sometimes I don't want fancy. I use it a lot to make dough which I then make into bread rolls, pizza bases or bread like this garlic and rosemary focaccia. The breadmaker does all the hard work of kneading and I just bake it in the oven.

To make this garlic and rosemary focaccia in the breadmaker you'll need:

How do you make focaccia in the breadmaker?

Using a breadmaker to make the focaccia dough is so easy. You just put everything in and select the dough setting.

Once the breadmaker has finished, you shape the dough into a focaccia shape and leave it to rise once more before baking it.

Does it matter what order you put ingredients into the breadmaker?

I have found that it works whatever order I add the ingredients to the breadmaker. However, lots of breadmaker manufacturers recommend putting the liquid ingredients in first and the yeast last and so if you want to be on the safe side, do that! But if you accidentally put the flour in first, don't worry!

How do you make the holes on top of the focaccia?

Once the dough has risen and is ready to go in the oven I brush it all over with olive oil and crushed garlic. I then take the end of a wooden spoon and push it directly downwards into the dough almost to the baking tray but not quite.

If you are using fresh rosemary you can push little sprigs into the indentations too.

Can you make the dough by hand?

Of course, you can use the same ingredients and knead the dough by hand but a bread maker makes it so much easier. I love how simple it is to put all the focaccia ingredients into the machine, switch it on and then come back three quarters of an hour later to a lovely focaccia dough.

When I first made this bread, Little Miss Spice was a baby and I certainly didn't have time to commit to kneading bread in the kitchen. Being able to just dump the ingredients in the bread maker and let it do it's thing really was a life saver!

Can you adapt this garlic and rosemary focaccia recipe?

Garlic and rosemary focaccia is a classic recipe but you can adapt it. Why not add some olives? Cherry tomatoes are also great pushed into the dough.

In this updated (2021) recipe I've used fresh rosemary but when I first published it I used dried rosemary. Both ways are delicious but it definitely looks a bit prettier with fresh rosemary.

There is currently a trend for focaccia bread art so why not try something really creative with your focaccia?

How long does it stay fresh?

Like all homemade bread, this breadmaker focaccia is best on the day that it is baked. However, it will keep for a couple of days. If you find it is not quite so soft then just sprinkle a little water on it and put it in the oven for a few minutes.

Can you freeze focaccia?

Yes, cut the focaccia into squares or slices, wrap them up individually or in the sizes you think you will eat when you defrost it and then store them in an airtight container or bag for up to a month.

You can also freeze the dough after it comes out of the breadmaker. Coat it in a little oil and wrap it up in cling film.

As this recipe make a family sized focaccia loaf, it can be a good idea to freeze half if you are only feeding a couple of people.

What can you eat with focaccia?

We like to eat this with soups or salads as well as with cold meats and cheeses. If you like putting together charcuterie boards then this focaccia would go perfectly as part of a relaxed lunch.

If you like this then why not try my nigella seed flatbreads too? The dough is also made in the bread maker but can be made in a food mixer too.

Or why not try one of these recipes: 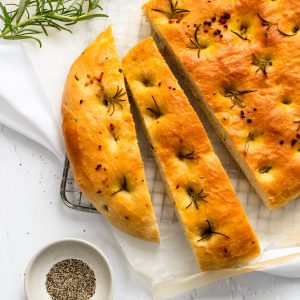 Corina Blum
This garlic and rosemary focaccia recipe with the dough made in the breadmaker is such a simple bread recipe.  It's easy to make and with very little hands on time.   It's so good for a tasty family meal.
3.47 from 13 votes
Print Recipe Pin Recipe
Prep Time 10 mins
Cook Time 25 mins
Bread maker time 30 mins
Total Time 35 mins
Course Bread, Side Dish
Cuisine Italian
Servings 4
Calories 385 kcal