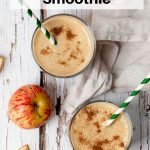 What could be more comforting than apple and cinnamon at this time of year? This cinnamon apple smoothie is a great choice for an easy breakfast or snack and perfect for using up a glut of apples.

I also love to make smoothies and so it was perhaps only a matter of time before I decided to create my own apple and cinnamon smoothie. It's healthy, filling and perfect for a breakfast in itself or as part of a more substantial breakfast.

As it's got apple in it's a great way to get one of your 5 a day too. It's easy to make, quick and nutritious too!

What ingredients do you need?

How to make cinnamon apple smoothie

This delicious milky apple smoothie is really simple to make as long as you have a blender. Just core and dice the apples and put all the ingredients in the blender and blitz it.

What kind of blender do you need to make it?

I usually use my Froothie Evolve power blender as makes a really smooth smoothie even with the added oats.

However, you can use any jug blender, although the more powerful the better.

Can you make it with a stick blender?

I find that stick blenders are not always as good to make smoothies with hard fruits like apple and oats as they don't always blend all the bits. That means you might end up with a slightly gritty texture. However, you can still make it.

I often soak the oats in the milk before making the smoothie as that softens them and helps ensure that they blend easily. If you are making this with a stick blender then I would definitely recommend you do this.

Can you adapt this smoothie?

Yes, you can. You could add additional ingredients such as banana or nut butters.

If you're not a fan of oats in a smoothie then miss them out.

If you don't have cinnamon you could try a spice blend such as apple pie spice, mixed spiced or pumpkin pie spice.

Can you make it with any kind of milk?

Yes, I chose to make this apple and cinnamon smoothie with almond milk as I am not very keen on the taste of cows milk. However, if you want to use cow's milk then that's fine.

I think plant-based milks are great for smoothies and you could replace the almond milk with a different plant-based milk too. Oat milk, soya milk or even coconut milk would all work well.

Because this smoothie uses almond milk it means it's great for anyone who is lactose intolerant or vegan. If you are allergic to nuts then just replace it with a different milk.

Can you make this smoothie in advance?

Yes you can, although it might separate a little if it stands for a while before you drink it. It's no problem though. Just stir it before serving.

I have quite a few smoothie recipes here on Searching for Spice and here are just a few of them: 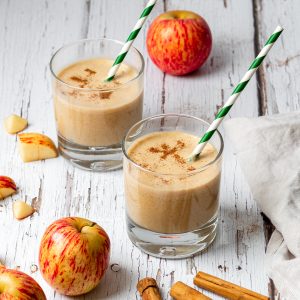 Corina Blum
What could be more comforting than apple and cinnamon at this time of year? This cinnamon apple smoothie is a great choice for an easy breakfast or snack and perfect for using up a glut of apples. It's also vegan.
5 from 5 votes
Print Recipe Pin Recipe
Prep Time 5 mins
Cook Time 0 mins
Total Time 5 mins
Course Breakfast, Drink, Snack
Cuisine International
Servings 4
Calories 104 kcal