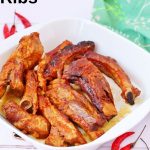 These slow cooked barbecue ribs have become a real family favourite recipe. They are so easy to prepare as the slow cooker does all the work to make a super tasty midweek meal for busy families!

I first made these slow cooked pork ribs back in 2011 and they were actually the first rib recipe that I posted here on Searching for Spice. Back then I was  member of a group called The Secret Recipe Club. Unfortunately it no longer exists but it was great fun at the time. Each month we were assigned another blog to secretly make a recipe from. I was assigned a blog called 365 Days of Baking.

I came across this recipe for barbecue spare ribs. It was a long time since I'd last made spare ribs, before I began my blog, and I'd never posted a recipe for them. At that moment I knew that what my blog was lacking was a killer spare rib recipe - and it seemed like I might have found it.

The only issue was that the recipe was for oven cooked ribs but I am a big fan of using my slow cooker for ribs. I knew these barbecue ribs would be great in the slow cooker too. Just like these Chinese slow cooker ribs!

I adapted the recipe for the slow cooker and I was so pleased with the result. The slow cooked ribs were lovely. The meat was tender, falling off the bone and full of flavour and the sauce was amazing.

According to my husband, 'This is the best new recipe you've made in a long time'. Need I say more. It looks like I'll be making them again soon. And  yes, seven years later and I am still making these ribs!

What if I don't have a slow cooker?

Well, these ribs are adapted from a recipe slow cooked in the oven. So, if you don't have a slow cooker then do check out the original recipe post for barbecue spare ribs.

Can you eat the leftovers later?

These slow cooker bbq ribs are so popular in our house that we usually eat them all in one go, even if I make a double batch! However, you can store the leftovers in the fridge for up to three days. Just reheat them thoroughly in the oven or microwave before eating them.

What can you eat with bbq ribs?

We love to eat the ribs as they are with bread, potato wedges or chips and coleslaw. I also usually make a big green salad to go with them and lighten up the meal.

Can you make anything with the leftover ribs?

You can take the leftover meat off the ribs and use it in another recipe. Some ideas for using the leftover bbq meat from the ribs include:

If you like slow cooking then do check out these slow cooker recipes:

You will probably also like my slow cooked bbq pork chops!

Or if you want to try baking in your slow cooker why not try this slow cooker gooseberry pudding? It's easily adaptable so you can use other fruit too.

If you just like tasty dinner recipes then do check out my recipe collection for easy spicy recipes that are perfect for midweek meal. 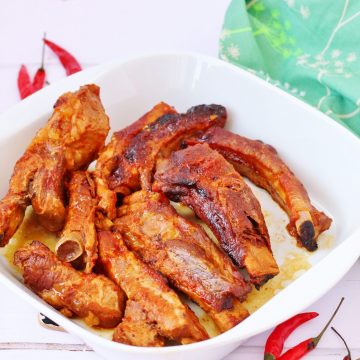