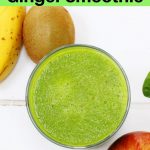 If you're looking for a super healthy smoothie that will help you chase the winter bugs away then this green ginger smoothie is just what you need. Made with spinach, ginger, apple, banana and kiwi fruit it's the best green smoothie ever!

This fruity green ginger smoothie has become my go-to smoothie this autumn and I know I'll be drinking it throughout the winter too. I just love ginger in a smoothie and a few weeks ago I shared my tropical ginger smoothie.

That one is delicious but I don't buy pineapples and mangos every week. I do buy apples, bananas and kiwi fruit. So that makes this my everyday ginger smoothie. I'm not just saying that, I really do make this smoothie almost every day.

It may be my everyday smoothie but it's not at all everyday in flavour. The ginger gives it a spicy kick. The banana, apple and kiwi fruit give it a delicious fruity taste. And the spinach? Well the spinach makes it green.

Can you taste the spinach?

Spinach is such a mild green that although you can taste it, the fruit and ginger are the main flavours. That makes this a perfect smoothie to start with if you haven't added spinach to a smoothie yet. I hate to say it as I love ginger in smoothies but if you don't like ginger you could miss it out and still have a tasty green smoothie.

I mentioned in my previous post that for the last couple of winters I've suffered with lots of colds and I'm hoping that my ginger smoothie habit is going to change that this year. It may be mainly psychological but this really does make me feel healthier and more energetic as I drink it.

I know it's still early but so far I haven't had a cold. If you're a regular blog reader I will let you know if it really works. Or at least if I have fewer colds than last year. I'm also making this orange smoothie with carrot and ginger for a bit of a change too!

. I've been using it for about a month now and love it as it's easy to clean, powerful enough to blitz tough ingredients like ginger and it's also affordable. So far I'm really happy with it.

If you like this smoothie then why not try one of these smoothie recipes: 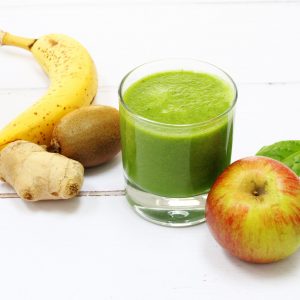 You can also add ice cubes to the before blending if you want the smoothie to be ice cold. Make sure the smoothie cup isn't too full.   Don't fill above the max line. Nutritional information is approximate and a guideline only.

Do let me know if you make this fruity green smoothie recipe. I love to get feedback from readers.