Fruity and creamy, this homemade mango parfait is a delicious frozen dessert! It's served with a refreshing lime and ginger jelly and makes an ideal dinner party dessert!

It's a little sad to think that this is my last Masterchef post of the series. I've enjoyed watching each episode, making notes and thinking about what I could make. At the same time, the last few weeks have been very hectic. I've been away at weekends and very busy at work so I haven't always had as much time as I'd have liked.

I've learnt so much about cooking!

Even so, I've managed to make something every week including lots of things that I had never made before, such as the Frangipane tart and the dumplings. As a result, I feel I have learnt a lot and developed my cooking. And I have to say, I've done it all in the much less stressful environment of my own home rather than in the Masterchef studio. I'd still like to take part in Masterchef. There's just one problem. As you'll see from the picture below, my presentation skills are still not quite up to scratch!

My Most Popular Inspired by Masterchef recipes

What to Make from the show?

When deciding what to make this week I was very tempted by Tim's trio of burgers. Not however, tempted to make them his way as I didn't fancy raw beef. I just considered making all my favourite burgers as minis. But, I ate so much meat last weekend that the burgers will just have to wait.

Just what is a parfait?

When I decided on Sara's parfait I have to admit that I wasn't quite sure what distinguished a parfait from a mousse, a fool, a panna cotta or any other creamy looking dessert often made in a ramekin. The main reason I chose to make the mango parfait is that mango is my favourite fruit, and so it had to be good.

What's the difference between and American parfait and a French parfait?

Anyway, with a bit of research I discovered that a French style parfait is a frozen creamy dessert, but there is also an American style parfait, which is served in a glass with cream and fruit, possibly more like what I would think of as a fool.

Then as I was doing my research into how to make a French style parfait, I actually came across Sara's recipe on the BBC Food website. For all I know, all the other dishes I've made are there as well, I just haven't checked yet, and I don't think I want to. It was more fun to develop them myself.

How I adapted the mango parfait recipe

Anyway, due to lack of time, I did follow Sara's recipe for the parfait. I just reduced the quantities by a third, so it would serve 4 instead of 6. In the end though, there was only enough for 3 servings. Instead of making a passion fruit glaze, I decided a lime and ginger glaze would complement the mango well. And give it a sight Caribbean flavour!

Although I kept taking the ginger jelly out of the fridge to stir, I obviously didn't do it quite often enough. As you can see, it turned out more like a  jelly than a  glaze. At one point it was perfect as a glaze, thick and smooth, the next time I looked at it, it was set. I would advise making it an hour before serving if you want it as a glaze. If you're happy for it to be a jelly, you can make it whenever's convenient, which for me, was straight after making the parfait.

Don't be put off by my poor photography!

Now, as I've said, this dish would not win the Masterchef final for me in terms of presentation. The cling film must have had quite a few creases in it and the jelly looks like it's been played with! it  I hope it won't put you off.

What did we think of the mango parfait and lime jelly?

Personally,  I thought the star was the lime jelly. I loved it, and thought it went really well with the parfait. My husband preferred the parfait and wasn't quite so keen on the jelly. We'll just argue between ourselves about who has the better palate! 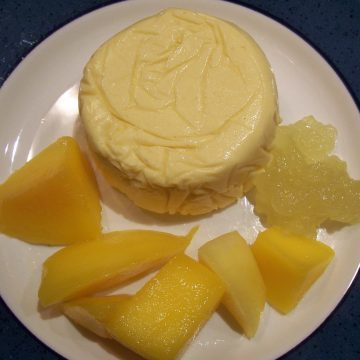 Instructions for the Mango Parfait

How to make the Lime Ginger Jelly

I love making frozen desserts. I even bought an ice cream maker after making this mango parfait and I use it all the time in summer. It's so easy to use and I can create whatever flavours I feel like. Why not check out some of these recipes?

Mango Sorbet with a hint of lime 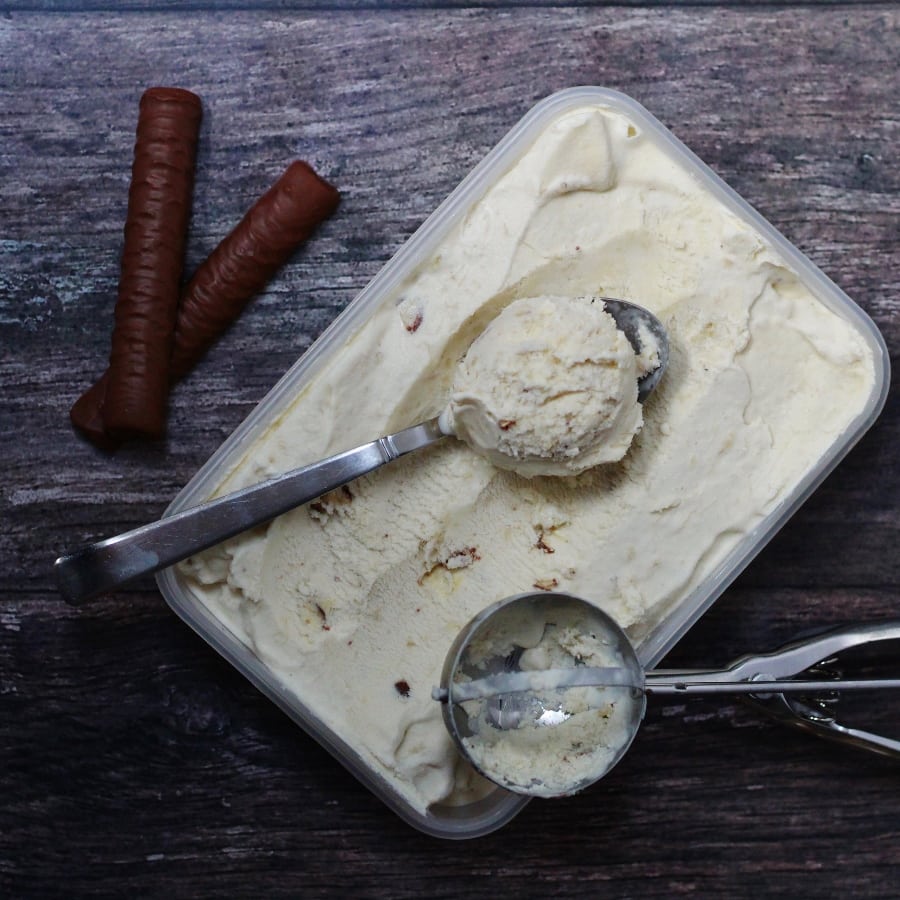