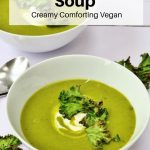 This potato and kale soup is a healthy soup that tastes really creamy but without the cream! It's a comforting winter soup that is super easy to make and if you leave out the yogurt, it's vegan too!

A great way to use up big bags of supermarket kale

This creamy potato and kale soup is the perfect easy recipe for using up one of those big bags of supermarket kale. You know the ones I mean. You buy them full of enthusiasm and eager to feed your family the tastiest healthiest meals ever and then...

Well, there's often a more tempting meal option. Despite kale being so in vogue right now, and despite everyone knowing how healthy it is, it somehow loses out to a more tempting dinner prospect.

Or maybe that's just me? I'm not saying I don't like kale. What I am saying is that however much I like kale, it struggles to compete with sweeter vegetables such as peas, peppers and tomatoes. Although on a side note, it is delicious with those vegetables in a stew.

Anyway, getting back to this soup! This creamy potato and kale soup has absolutely no cream in it at all. The creaminess comes from the potato that breaks down and gives it that lovely smooth texture.

I have to admit, I haven't served it as a vegan soup as I've added a dollop of yogurt. However, you can omit the yogurt or use a vegan yogurt instead, making this delicious kale soup vegan friendly as well!

Is it a spicy soup?

I'd call this kale soup a gently spiced soup. It's flavoured with turmeric and black pepper. It's true that the turmeric flavour is subtle but it does give this soup a gentle warmth and because it's not masked by other spices, it is discernible. In taste and colour!

The turmeric gives this kale and potato soup a lovely warm yellow tinge that dyes the wooden spoon as you're preparing it. And any clothes that get too close too!

Recently turmeric has been hailed as a superfood as it contains the active ingredient curcumin, which is an anti-inflammatory and antioxidant and great for digestive health. Even so, it is often thought of as little more than the yellow food colour often used in Indian food or as a cheaper alternative to saffron in Spanish paellas.

For more recipe ideas using turmeric, take a look at these turmeric recipes from BBC Food.

How can you adapt this potato and kale soup?

I normally go for soups packed with herbs and spices and strong flavours all the way. As I said, this potato and kale soup is subtly spiced but that's no reason not to add a spoonful or two of curry powder or a little cumin and coriander if you prefer a punchier soup.

As I said, you can make this soup vegan by using a dairy free yogurt.

What about the kale chips on the soup?

I have garnished this soup with kale chips made in my new air fryer (a Christmas gift from my family!). I spray them with oil, sprinkle on a tiny bit of salt, rub it in, then cook them for just 3 minutes in the air fryer basket. They are deliciously crispy - unless they sit on the soup for too long! It is far better to serve them in a dish on the side!

I love a good soup in winter and have lots of vegetarian options. How about one of these?

Do check out my recipe collection of easy homemade soups for more recipe ideas! 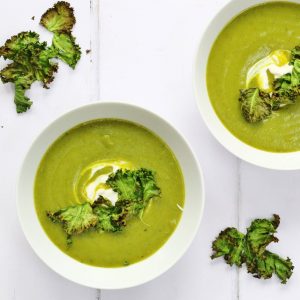 For extra flavour, add a little curry power along with the turmeric. Nutritional information is approximate and a guideline only.

Cook Once Eat Twice here at Searching for Spice