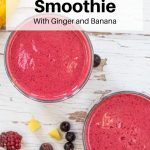 Fresh root ginger adds a delicious touch of heat to this pretty red berry smoothie. Made with frozen berries, banana, ginger and yogurt, it's an invigorating smoothie to help you feel healthy and energetic! So why not start a smoothie habit today?

Most years I get to the point where I feel I need a bit of a health kick. I want to eat healthily and exercise regularly. Not that I'm not fairly healthy most of the time anyway, but it always feels good to make a fresh start.

The ginger just adds an extra dimension. It gives the smoothie a touch of heat and of course it goes perfectly with the berries.

So what ingredients are in this smoothie?

To make this smoothie you'll need red berries, a banana, root ginger and yogurt. I also add some water.

I've used frozen berries as they make sure the smoothie is cold after being blended. You can replace them with fresh berries but if you do you may want to add a few ice cubes to keep the smoothie cold.

Alternatively, you can use frozen slices of banana instead of frozen berries.

I used frozen mixed berries but you could replace them with just one kind of berry. Blueberries or raspberries would all work well.

I like to add water instead of juice as it doesn't add any extra sugar and it also doesn't add any additional flavour dimension. Of course, if you want you could use juice or even milk or a milk substitute instead of the water. Coconut milk would work very well.

If you don't have any fresh root ginger, you could experiment with half a teaspoon of ground ginger or even a little crystallised ginger.

What equipment do you need to make this smoothie?

I used my Froothie Evolve high speed blender*. It's a fantastic blender that is great for smoothies, nut butters, sorbets and soups. It's especially good for smoothies as it has air vacuum technology meaning the air is sucked out so there is zero oxidation. And as a result more nutrients are retained in the smoothie. That's got to be a good thing!

If you want to read more about the Froothie Evolve then do check out my review post as well.

Of course, any powerful blender can be used.

Can you make this smoothie with a stick blender?

Because this red berry smoothie contains frozen berries and especially because of the ginger, it's best to use a powerful blender. A stick blender just isn't tough enough for this particular smoothie.

However, if you only have a stick blender you can adapt the recipe. Grate the root ginger before adding it to the other ingredients and don't use frozen berries.

Do you have to peel the ginger?

It really depends on how powerful your blender is. If you have a really powerful blender, like the Froothie*, then it will blend the ginger completely and you won't be able to tell whether there was skin on the ginger or not.

I love making smoothies at home and here are some of my favourites: 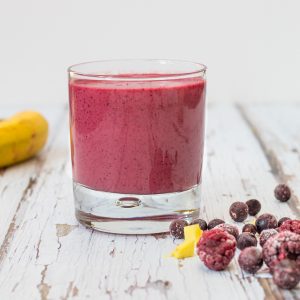